A new study co-authored Dr. Audrey E. Hendricks, assistant professor of biostatistics and informatics at Colorado School of Public Health, has determined that choices of protein intake from solid foods has a significant impact on infant growth during the first year of life.

The study tested whether dairy-based or meat-based protein in an infant’s diet contributed to growth and weight gain. Sixty-four formula-fed infants were involved in the study, with the group evenly divided between those who ate dairy and those who ate meat in addition to their formula, fruits, vegetables and infant cereals. 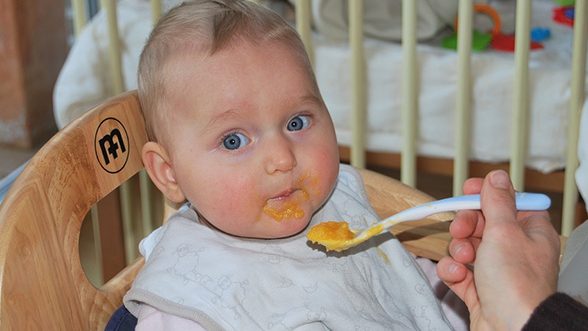 “Although breastfeeding should be the norm, the majority of U.S. infants are formula fed and limited research has focused on formula-fed infants. We found that the source of protein may have an important role in regulating growth,” said Dr. Minghua Tang, assistant professor of pediatrics at University of Colorado School of Medicine, who led the study. “Infants who consumed meat-based solid foods had a greater length gain while both groups gain similar weight.”

The study, published recently by the American Journal of Clinical Nutrition, is perhaps the first of its kind to evaluate the effect of protein from different food sources on growth in formula-fed infants during the first year of life. Such studies can provide evidence-based feeding guidance that can yield long-term benefits for optimal growth and obesity prevention.