The Columbia University Mailman School of Public Health is calling for nominations for the Frank A. Calderone Prize, the most prestigious award in public health.  Presented bi-annually at a ceremony in New York City, the Calderone Prize honors individuals who have made transformational contributions to the field of public health. Previous honorees include Dr. Peter Piot, Ms. Mary Robinson, Dr. Nafis Sadik, and former Mailman School Dean Allan Rosenfield. The 2016 Calderone Prize was presented to Dr. Mary T. Bassett, commissioner of the New York City Department of Health and Mental Hygiene. 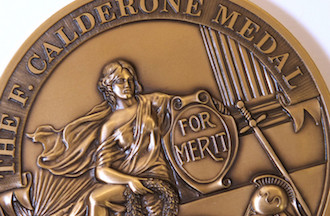 The award is named for Dr. Frank A. Calderone, who served the City of New York as the Department of Health District Health Officer, as director of the Headquarters Office of the United Nations Interim Commission of the World Health Organization, and who held key positions in the permanent organization, including chief technical officer and New York office director. Subsequently, Dr. Calderone was appointed medical director of the United Nations Secretariat Health Service. The prize was established in 1986 through the generosity of Dr. Calderone and his family.

The 2018 honoree, who will deliver a special lecture to become part of the Calderone Prize archive, will be selected by a committee that includes Dr. Linda P. Fried, dean of the Mailman School, and Dr. Alfredo Morabia, editor-in-chief of the American Journal of Public Health.

Read more about the Calderone Prize
Download the 2018 ballot.

Nominations are being accepted through June 30.