The Columbia Center for Children’s Environmental Health (CCCEH) is celebrating 20 years of progress in protecting children from environmental threats. An event on January 31 will mark the milestone while looking ahead to the significant work needed to further protect children’s health.

Founded in 1998, CCCEH has organized research studies in New York City and globally that have uncovered the harms of early childhood exposures to air pollution, pesticides, and other environmental chemicals. Through partnerships with community environmental justice groups, the center’s findings have led to several important policy changes, from the decision to phase-out dirty diesel city buses in New York City to Hawaii’s recent ban on the toxic pesticide chlorpyrifos.

The centerpiece of the Center’s research, the Mothers and Newborns study enrolled more than 700 pregnant women from Northern Manhattan and the Bronx, beginning in 1998. The health of children born to these mothers has been followed since birth. 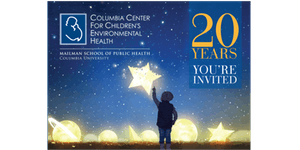 With continuous funding by the National Institute of Environmental Health Sciences (NIEHS) and the Environmental Protection Agency (EPA), CCCEH studies have helped establish the fetal origins of disease. A series of articles in peer-review journals traced the connections between early life exposure to various chemicals and risk for later outcomes, from low birth weight and asthma to cognitive and behavioral problems, and obesity. CCCEH research findings have provided key evidence for policy changes, including the introduction of clean public buses in New York City and the industry phase-out of bisphenol A (BPA) and polybrominated diphenyl ethers (PBDEs)—chemicals used in plastics and flame-retardants.

Today, even as the children in the Mothers and Newborns study are now adolescents or young adults, the CCCEH continues to track their health. In parallel, their younger siblings are also being studied, along with a new cohort of mothers and children enrolled beginning in 2013. Many new developments are on the horizon. This year, the center is launching a new program led by Dr. Perera dedicated to translating research into policy. At the same time, researchers are introducing new tools like a silicon wristband which, like backpack air monitors, can measure exposure to various toxins.