Drs. Salim and Quarraisha Abdool Karim in the department of epidemiology at the Mailman School of Public Health were honored by the Institute for Human Virology (IHV) with a Lifetime Achievement Award for Public Service at the 19th Annual International Meeting of Top Medical Virus Researchers in the U.S. 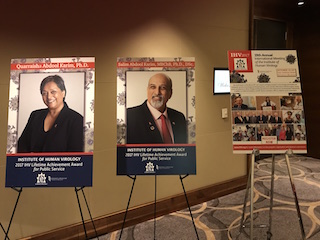 They received the award in recognition of their outstanding contributions to research on the AIDS pandemic. The Karims were nominated and voted upon by IHV faculty and accepted the award at a ceremony on October 25.

“To me, both of these renowned individuals have made some of the greatest contributions in the history of HIV/AIDS in public health and epidemiology relevant to prevention and care of infected people,” said IHV’s director Dr. Robert Gallo. “I don’t know any person or persons who have done more to advance the proper care of people with HIV infection or the prevention of HIV infection among a population.”

Currently, the Karims’ research is focusing on preventing the spread of the virus in African women. In 2010 their groundbreaking research demonstrated that antiretrovirals can also prevent the sexual transmission of HIV in what was a watershed moment in the fight against the spread of the virus. The research was highlighted by science as one of the Top 10 scientific breakthroughs in 2010. Both Drs. Abdool Karim have received numerous awards for their achievements.