Dr. Salim S. Abdool Karim, CAPRISA Professor of Global Health in Epidemiology at Columbia University Mailman School of Public Health, and director of the Centre for the AIDS Program of Research, pro vice-chancellor (research) at the University of KwaZulu-Natal in South Africa, is the recipient of the ‘Al-Sumait prize’ for research contributions. The prize recognizes a body of research that has significantly advanced progress in the economic and social development in Africa.  An initiative of the Amir of the State of Kuwait, the Prize honors the late Dr. Abdulrahman Al Sumait, a Kuwaiti doctor who dedicated his life to supporting humanitarian projects and addressing the health challenges confronting Africa. 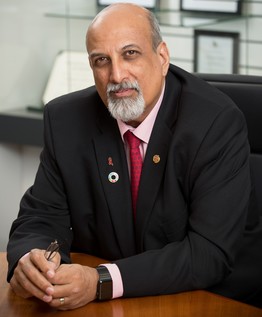 Dr. Karim, awarded half of a $1 million prize, was recognized for his contributions to science in HIV treatment and prevention over the past three decades, which have led to significant changes in health policy and practices worldwide. He has published more than 350 papers in world-class medical journals. In making the award, members of the selection committee noted his efforts in research on prevention and treatment of AIDS patients have been a major factor in the decline in HIV/AIDS and mortality rates in Africa and the world.

His findings on HIV-TB, a leading cause of death in Africa, are specifically mentioned in many country treatment policies and guidelines, and are being implemented worldwide. Specifically, HIV-TB deaths have halved in South Africa since 2012. The program also succeeded in documenting the importance of male circumcision and its positive impact as an effective means of reducing HIV and other sexually transmitted diseases.

“Our goal with this prize is to promote positive change across Africa, and laureates of the Al-Sumait Prize for African Development have been working tirelessly in their field of Health to create a positive and sustainable difference across Africa and the world,” said H.E. Sheikh Sabah Khaled Al-Hamad Al-Sabah, deputy prime minister, minister of foreign affairs and chairman of Al Sumait’s Board of Trustees.

Members of the Board of Trustees which oversees the prize include Bill Gates, co-chair of the Bill & Melinda Gates Foundation. The second half of the $1 million prize was shared equally between professor, Dr. Sheila K. West, vice chair for research Wilmer Eye Institute at Johns Hopkins University School of Medicine, and the Rakai Health Sciences Program in Rakai, Uganda.