ICAP, the Mailman School-based organization dedicated to fighting infectious disease and strengthening health systems globally, prides itself on working closely with governments and communities around the world. An April 4 press conference at the Columbia University Mailman School of Public Health demonstrated that ICAP’s global efforts are undergirded by support from elected officials closer to home. 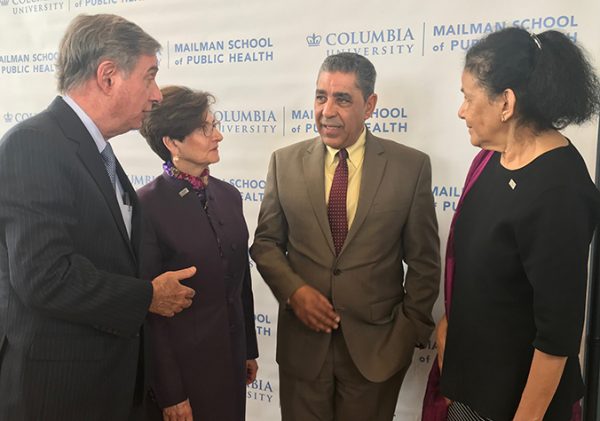 Since 2008, ICAP has been working with Ethiopia’s Federal Ministry of Health under PMI to improve the ability of Ethiopian health centers to detect, diagnose, and treat malaria. As a result, the accuracy of diagnosis of malaria has risen from 59 percent in 2011 to 97 percent in 2016. Most importantly, this work has contributed to a notable reduction in annual malaria-related deaths, which have declined from more than 2,000 in 2012 to just 374 in 2017. Yet much work remains.

Each year in Ethiopia, there are 1.5 million cases of malaria, a major cause of suffering and an impediment to development. The good news, said Dr. El-Sadr, is that malaria is preventable, treatable, and can be cured. Speaking in the press conference, which was being watched by livestream in Ethiopia, she said, going forward, ICAP will continue to work with the government there to scale-up and strengthen anti-malaria efforts, particularly among vulnerable groups such as pregnant women and children. Moreover, lessons learned in Ethiopia can be applied to other diseases and other regions — even here in New York City where ICAP runs two health clinics.

The continued funding, Dr. El-Sadr predicted, will yield “the most coveted of returns: lives saved and the health of communities further improved.” Thanks to Congressman Espaillat and other enlightened allies, she said, “we’re able to advance a great American tradition of helping other countries improve the health and well-being of their citizens — a path that ultimately leads to a safer, more prosperous, and peaceful world for all.”

Health care providers and community members in Sierra Leone are eager for new ways to protect children from malaria. Sierra Leone’s National Malaria Control Programme (NMCP) launched an ambitious Intermittent Preventive Treatment of Infants (IPTi) with sulfadoxine-pyrimethamine IPTi program, aiming to implement the treatment nationwide. The ongoing study is supported by ICAP at Columbia’s Mailman School of Public Health and is being conducted in collaboration with the Ministry of Health and Sanitation (MOHS) and the U.S. Centers for Disease Control and Prevention (CDC).

Malaria is one of the leading causes of death among children in Sierra Leone. The treatment has potential for national scale-up, according to the study. Recommended by the World Health Organization since 2010, IPTi is a full therapeutic course of antimalarial medicine delivered to infants in the context of routine immunization services during the first year of life, when they are at high risk for exposure.

A larger assessment underway in 2018 is measuring the program’s impact on morbidity and mortality. Researchers will assess IPTi coverage and its effect on malaria-related illness and death through a household survey and abstraction of medical records.

On April 25, Mailman School student organization One Health Initiative will hold a schoolwide lunch and speaker event to commemorate World Maria Day. There will be an introductory video message by Mailman’s own Dr. Awash Teklehaimanot, professor of epidemiology, whose career in malaria research policy spans several decades devoted to understanding the dynamics of malaria transmission and the efficacy of antimalarial drugs. Presently, Dr. Teklehaimanot is engaged in providing technical support and mobilizing resources for malaria control in ten African countries, as part of the Quick Wins Initiative of the Millennium Project. The video will be followed by a series of TedTalks on the disease.