The New York Academy of Medicine awarded its 2018 Stephen Smith Award for Distinguished Contributions in Public Health to Wafaa El-Sadr, MD, MPH, MPA, University Professor of Epidemiology and Medicine, and founder and global director of ICAP at Columbia University. El-Sadr, who also holds the Dr. Mathilde Krim-amFAR Chair in Global Health at the Columbia University Mailman School of Public Health, was honored at the Academy’s 171st Anniversary Discourse & Awards Ceremony on November 1st for her leadership in combatting HIV and other global health threats, and strengthening health systems worldwide in partnership with governmental and non-governmental organizations.

El-Sadr is an international expert in epidemiology and research on the prevention and management of HIV, tuberculosis, and other infectious diseases. For over three decades, she has advocated for families and communities most impacted by HIV and championed a collaborative, multidisciplinary approach to confronting the global epidemic. She leads ICAP’s portfolio of projects in more than 30 countries; under her leadership, ICAP has become a global leader in health systems strengthening and addressing major public health challenges including maternal and child health, women’s health, and non-communicable diseases, among other health threats.

Linda P. Fried, MD, MPH, dean of Columbia Mailman School, presented the award to El-Sadr on behalf of the Academy. “I cannot think of anyone more deserving of this honor than Wafaa El-Sadr. I have the honor of working with her every day and she is so much more than the achievements she is credited for. Wafaa is focused and passionate about ensuring health for all, strengthening partnerships to deliver HIV services, treatment and care to marginalized populations. She believes that everyone is deserving of health and has demonstrated that it is possible.”

Accepting the award, El-Sadr said, “I stand before you tonight on behalf of the 2,000 employees at ICAP working tirelessly around the globe. I am so deeply honored to receive this award in the name of Stephen Smith, a true public health pioneer.” Smith led the establishment of the Metropolitan Board of Health in New York City in 1866, the first public health agency of its kind in the United States. He also founded the American Public Health Association in 1872.

El-Sadr has been a cherished member of the Columbia community for 30 years, joining the College of Physicians and Surgeons in 1988, and then the Mailman School of Public Health, her alma mater, as a  professor of epidemiology and medicine, in 1999.

Prior to her work at Columbia, El-Sadr spent more than two decades at Harlem Hospital in New York City as the HIV epidemic took hold in the United States. As chief of the Division of Infectious Diseases at Harlem Hospital, she developed successful methods for responding to HIV/AIDS through groundbreaking research and innovative models of care in her own community. “Working at Harlem Hospital shaped me,” said El-Sadr. “The lessons I learned there were invaluable and taught me the importance of engaging with the community, and that we have to listen to people and meet their needs, not what we have determined to be their needs.”

El-Sadr is a principal investigator of the NIH-funded HIV Prevention Trials Network (HPTN), which seeks to prevent HIV transmission globally. She is a member of the NIH Fogarty International Center Advisory Board. In 2009, she was appointed to the National Academy of Medicine and in 2008, she was named a John D. and Catherine T. MacArthur Foundation Fellow, often referred to as “genius award.” She is widely published in scientific literature, is a global thought leader, and serves as a model of service and dedication for countless students and colleagues at Columbia and beyond. 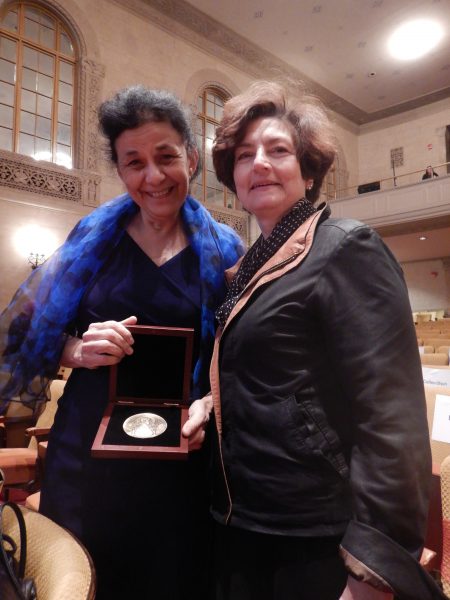