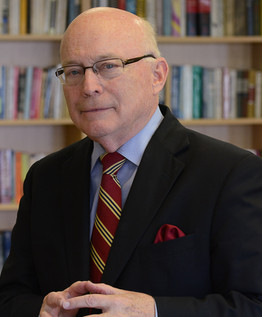 Hosted by Emmy Award-winner Ms. Meredith Vieira, Incredible Aging is based on the latest science on healthy aging — much of it funded by the American Federation for Aging Research (AFAR), of which Dr. Rowe is former board president. In addition to Dr. Rowe, the special includes interviews with other experts in biology, gerontology, neuroscience, nutrition, and medicine on a range of advances in cutting-edge research poised to extend “healthspan.”

Dr. Rowe is a former CEO of Aetna and previously served as president and CEO of Mount Sinai Medical School and Medical Center, and of Mount Sinai NYU Health. In the first phase of his career, he helped establish the fields of geriatrics and medical gerontology, receiving tenure as a young academic at the Harvard Medical School. More recently, and since joining the Mailman School’s department of health policy and management ten years ago, he has led the critical effort to create policies and institutions that are responsive to an increasingly aging society, while simultaneously serving as one of the nation’s leading voices on health reform and the transformation of the U.S. health system more generally. Dr. Rowe currently leads the MacArthur Foundation’s Network on an Aging Society. Most recently he was the senior author of a New Global Aging Index that Gauges Health and Wellbeing of Aging Populations. Read more here about the Index and to access the Index of Societal Aging tool online.