Columbia: Scientific Presentation by Population and Family Health Professor Helps Convince Officials in Hawaii to Say No to Toxic Pesticide

The biggest news in Hawaii has been the ongoing eruption of the Kilauea volcano that has destroyed homes on the Big Island. While less dramatic, for many years, the state’s residents have faced a different, although no less serious, threat: exposures to the pesticide chlorpyrifos, which research by Mailman School faculty has shown endangers children’s health.

Earlier this month, with bipartisan support, the Hawaii state legislature voted to ban the chemical, which if signed into law by Governor David Ige would make the state the first in the country to do so. Prior to vote, Dr. Virginia Rauh, Columbia Mailman School professor of Population and Family Health and one of the nation’s leading chlorpyrifos researchers, traveled to the state capital where she met with the Governor and state legislators to explain what the science says about its health risks. 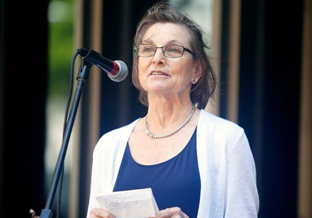 Over the past 15 years, Dr. Rauh and collaborators at the Columbia Center for Children’s Environmental Health have studied the chemical, finding the greater the level of exposure during pregnancy, the lower the child’s IQ score. Another study documented exposure-related structural changes to children’s brains in areas governing attention, planning, and other executive functions. Ongoing research with the Departments of Neurology and Biostatistics is looking at movement and motor symptoms that might relate to early Parkinson’s disease.

During the Obama Administration, the Environmental Health Administration proposed banning chlorpyrifos for agricultural uses based on the scientific evidence amassed by Dr. Rauh and others; a decade earlier, it had been phased-out for residential use as an insecticide. However, Mr. Scott Pruit, the agency’s current director, reversed the proposed ban, questioning the application of epidemiological research.

Invited by HAPA (Hawai’i Alliance for Progressive Action), Dr. Rauh presented her research findings at the state capitol and answered questions from legislators. She also met with Governor Ige who had a copy of her recent New England Journal of Medicine Perspective article on his desk. In that article—one of only a few on environmental topics to be covered in a Perspective’s piece in the journal’s history—Dr. Rauh argued that the EPA’s reversal on chlorpyrifos, violates the agency’s duty to protect human health, and child health in particular.

“I walked the legislators through what our research has found in the cohort of children here in New York City,” says Dr. Rauh. “We’ve studied chlorpyrifos before and after the residential ban, and the differences in exposure levels are stark. Given the ongoing agricultural applications in many parts of the country, children continue to be exposed to levels of chlorpyrifos that have been associated with a range of cognitive and motor deficits. Such risks are unacceptable and preventable with sound public health policy.”

“It was divine timing that Professor Rauh’s article in the New England Journal of Medicine article came out when it did,” said Ms. Anne Frederick, executive director of HAPA. “It added a layer of scientific expertise and authority. She really got people to listen.”

The bill, which is expected to be signed by Governor Ige, would be the first to regulate the agrichemical industry in Hawaii. The chlorpyrifos ban would go into effect in January, although farmers can apply to be exempted until 2022.

The legislation follows two similar but unsuccessful efforts by New Jersey and Maryland.

In Hawaii, the issue was particularly urgent for residents of Kauai where several of the world’s biggest agrichemical companies test their genetically engineered crops—a process that involves intensive pesticide spraying. The spraying disproportionately affects communities of color living near the test fields, including many native Hawaiians.

Ms. Anne Frederick, executive director of HAPA, says residents of Kauai started pushing for regulations around pesticide use a decade ago after several students in schools near corn fields got sick and the school was evacuated. When the companies wouldn’t tell residents what chemicals they sprayed, the community pushed for more government oversight.

“Early on, residents would talk to the legislature about the issue and the reaction was that they were hysterical,” says Frederick. “Once we got the scientists and the medical community involved, they started taking us more seriously. It was divine timing that Professor Rauh’s article in the New England Journal of Medicine article came out when it did. It added a layer of scientific expertise and authority. She really got people to listen.”

The bill, which is expected to be signed by Governor Ige, would be the first to regulate the agrichemical industry in Hawaii. “It shows it’s possible to push back against this industry,” says Ms. Frederick. “We’re hoping it makes it easier for other states looking to do the same.”