People with celiac disease who are extremely vigilant about not ingesting gluten may perceive that their quality of life is reduced, according to a new study co-authored by Dr. Benjamin Lebwohl, assistant professor of epidemiology at Columbia University Mailman School of Public Health and assistant professor of medicine at Columbia University Medical Center. The findings are published online in the journal Digestive Diseases and Sciences. 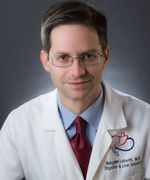 Celiac disease is an autoimmune disorder that affects roughly one of every 100 people in the U.S. People with celiac disease must avoid foods and medications that contain the gluten protein from wheat, barley or rye. Ingesting these proteins causes their immune system to attack their intestines, resulting in malnutrition and a host of other problems.

The research team studied 80 teens and adults with celiac disease, most of whom had been diagnosed at least five years earlier. The participants spoke with the researchers in person and on the phone for a total of three times over the course of a month.

Participants answered questions about dietary adherence, vigilance, energy levels, knowledge about gluten-containing foods, and quality of life issues related to celiac disease. Based on their answers, they were classified as being ‘extremely vigilant’ or ‘less vigilant.’

Twelve of the 50 adults and seven of the 30 teenagers in the study were considered extremely vigilant.

“The ‘extremely vigilant’ adults” – that is, those who only used celiac-friendly restaurants, asked thorough questions when eating out, examined all food, medication, supplement labels, avoided all potential sources of cross-contamination in the home, etc. – “had significantly lower quality of life scores compared to their less vigilant counterparts.

For those “extremely vigilant” patients, “having supportive family and friends, cooking at home (as opposed to eating out) and using internet sites and apps to facilitate gluten avoidance were particularly prevalent strategies to maintain a strict gluten-free diet. The study could not prove that being hypervigilant was the cause of participants’ worse quality of life.

Dr. Lebwohl and colleagues recommend ongoing involvement of a registered dietitian, beyond the initial diagnosis.

“Physicians need to promote a strict gluten-free diet for the control of symptoms and improved long-term health outcomes,” said Dr. Lebwohl. “But we must acknowledge that tightening the screws on gluten avoidance may come at a cost in terms of quality of life. It is easy for us to tell patients to take additional precautionary measures, but such measures may take a toll on the patient.”

The study was supported by Columbia University’s CTSA Grant No. UL1 TR000040 from NCATS/NIH, and the Provost Investment Fund at Columbia Teachers College.