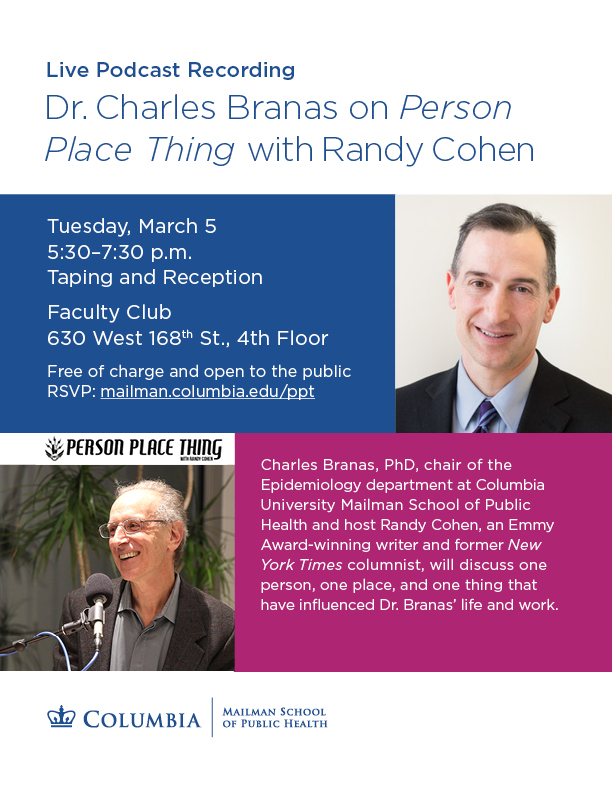 On March 5, 2019, former New York Times Magazine editor of “The Ethicist” column Mr. Randy Cohen, who is now host of the popular public radio program Person Place Thing, will interview Dr. Charles Branas, chair of the epidemiology department at Columbia Mailman School of Public Health, and an expert on gun violence. The interview will take in front of a live audience and will include discussion on those “persons, places, and things” that have influenced Dr. Branas’ life and career. The event will be held on March 5, 2019.

Dr. Branas, who is also an Anna Cheskis Gelman and Murray Charles Gelman Professor at the Columbia Mailman School, has conducted research that extends from urban and rural areas in the U.S. to communities across the globe, incorporating place-based interventions and human geography. His pioneering work on geographic access to medical care has changed the healthcare landscape in the U.S. and other countries for many conditions: trauma, cancer, stroke, etc. His research on the geography and factors underpinning gun violence has been cited by landmark Supreme Court decisions, Congress, and the NIH Director. Dr. Branas has also led large-scale scientific work to transform thousands of vacant lots, abandoned buildings and other blighted spaces in improving the health and safety of entire communities.

Randy Cohen’s public radio interview show is based on the idea that people are particularly engaging when they speak about something they care about. Guests are leaders in the arts, humanities, politics, and science. Mr. Cohen’s first professional work was writing humor pieces, essays, and stories for newspapers and magazines including The New Yorker, Harpers, The Atlantic, and Young Love Comics. His first television work was writing for “Late Night with David Letterman” for which he won three Emmy awards. His fourth Emmy was for his work on Michael Moore’s “TV Nation.” For twelve years he wrote “The Ethicist,” a weekly column for the New York Times Magazine. In 2010, his first play, “The Punishing Blow,” ran at New York’s Clurman Theater. His most recent book, “Be Good: how to navigate the ethics of everything,” was published by Chronicle.

A reception will follow the program, which includes a live performance by fiddlers Lily Henley and Duncan Wickel.

The event is free of charge and open to the public.