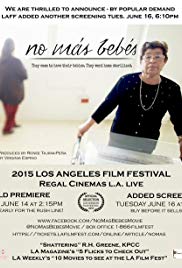 University of Texas Health Science Center at Houston School of Public Health is hosting a screening of “No Más Bebés”, a powerful documentary that follows the stories of several immigrant women who were unknowingly sterilized while giving birth in Los Angeles during the late 60s and early 70s. Set against the backdrop of current conversations around immigration and the women’s movement, this story offers perspective and insight still relevant to today’s public health discourse. Expect a rich and nuanced conversation with the film’s producer, Dr. Virginia Espino, in the Q&A following the screening.

The film was released at the Los Angeles Film Festival in 2015 and has been an official selection for the DOC NYC, the Ambulante Documentary Film Festival, and the Austin Film Festival. It was also the NALIP Opening Film in 2015.

This screening is part of a larger public health communications campaign, run by UTHealth School of Public Health faculty, staff and researchers, called Own Every Piece (OEP). OEP’s vision is for every woman to have the knowledge and access to choose the contraceptive method that works best for her body and lifestyle — so that she can own every piece of her life. This event is co-sponsored by the UTHealth School of Public Health’s Student Association, and Student Society for Global Health, and is also part of a series of events and digital communications highlighting Hispanic Heritage Month.