2017 was a record breaking year for disasters. The U.S. experienced three major hurricanes, out of control wildfires, flooding, mudslides, and two of the deadliest mass shootings to date. All told, these events caused billions of dollars in damage and cost many lives. 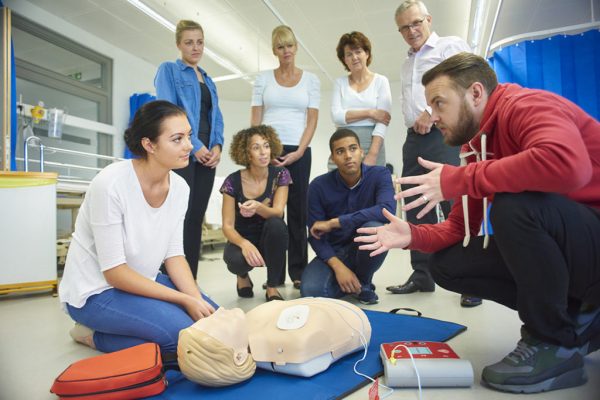 [Photo: A mixed age group listens as their tutor demonstrates the procedure involved to resuscitate using a defibrillator.]

That means training people who are not traditional “first responders” to help injured people get to a safer place or perform life-saving interventions, said Dr. Curt Harris, who is the associate director of the Institute for Disaster Management at the University of Georgia College of Public Health.

Sometimes, friends and neighbors are in a better position to react to an event than firefighters or emergency medical personnel, said Dr. Harris, who published his case for more civilian training in International Journal of Environmental Research and Public Health. For example, bystanders who pitched in to help stop bleeds and evacuate victims from the scene before responders could arrive saved lives in the wake of the Boston marathon bombing.

“It’s about empowering knowledge,” he said.

“We’re not looking to reinvent the wheel, but for someone to understand how to open up an airway, how to stop a bleed, these are things that we know to be lifesaving,” he said. “Whether it’s a tornado, a shooter, or a bombing event is irrelevant. These are the interventions that save people’s lives.”

Dr. Harris feels confident this type of training would stick with high schoolers into early adulthood because of how common disaster events have become.

“I think disasters have become so ubiquitous in our culture that it’s necessary to learn these skills at an early age so they can be put into practice when the time comes,” he said.

This “new” disaster training is not meant to stand alone. The goal is to broaden the emergency response workforce, and anyone trying to implement this curriculum should partner with existing emergency management community/organizations.

“It takes a village. There is no one discipline, no one set group of people who manage an event,” said Dr. Harris. “This has the opportunity to be a force multiplier for our health care and emergency management community, and I think that’s one of the major advantages.”