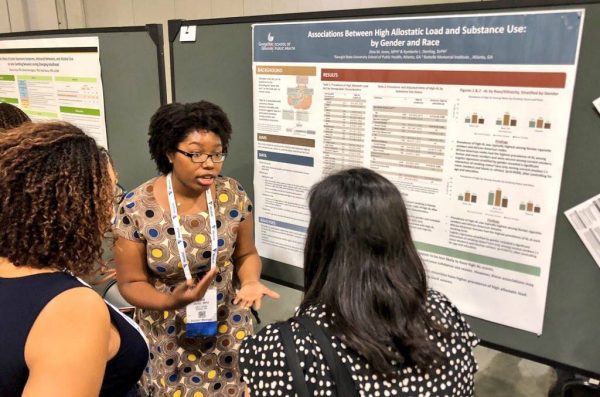 Ms. Jones, a third  year epidemiology PhD candidate, showcased her research into the relationships between drug, tobacco, and alcohol use and the body’s response to chronic stress. Her poster was titled, “Associations Between High Allostatic Load and Substance Use by Gender and Race.”

In her research, Ms. Jones used data from the 2009 – 2010 National Health and Nutrition Examination Survey. The data included biomarkers of “allostatic load,” which is described as wear and tear on the body due to chronic stress.

Ms. Jones’ study found that current users of cigarettes, alcohol, marijuana and other illicit drugs appeared to have lower prevalence of allostatic load than people who did not use those substances.

Her study also found that former smokers — particularly black women — had the highest prevalence of high allostatic load, which suggests that the negative physiologic effects of stress return after quitting tobacco.

“The findings are showing that substance use is a coping mechanism for the stress people are feeling,” Ms. Jones said. “And once people stop using those substances — as in the case of former smokers — you can see those stress markers return and have adverse physiological effects.”

Ms. Jones was one of only three student presenters to receive the award from the Alcohol, Tobacco and Other Drug Section of APHA.

November 15, 2017 "Michigan Research: ACA Program to Reduce Hospital Readmissions Not All It’s Cracked Up to Be" November 15, 2017 "NYU Clinical Professor’s Research on Lead Contamination in Kabwe Published in ScienceDirect"