High daily exposure to polycyclic aromatic hydrocarbons (PAHs) — chemicals that are generated by forms of combustion such as cooking, smoking, and vehicle exhausts — may cause molecular changes that accelerate biological aging, according to a new study by researchers from Harvard T.H. Chan School of Public Health and colleagues. They found that exposure to PAHs may trigger damage to DNA methylation, a mechanism used by cells to control the process by which the heritable information in a gene is expressed. This damage has been found by other studies to be associated with premature death, even after accounting for cardiovascular and other disease risk factors. 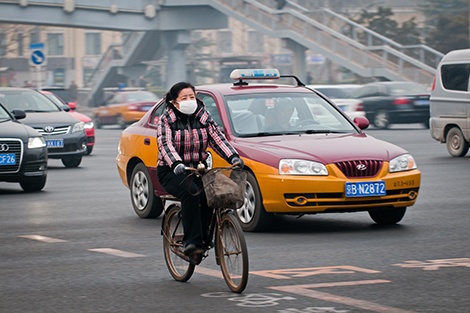 The DNA methylation of some genomic loci (positions on a chromosome containing different forms of the same gene) changes over time, so it can be used as a marker of biological age. Previous studies have shown that some people’s DNA methylation age can be higher than their actual age, and that this acceleration may be influenced by environmental factors.

The international research team — from the United States, China, and Canada — then used the model to look at the potential effects of PAH exposure on DNA methylation age.

They found that the more people were exposed to these chemicals, the more they displayed the markers of accelerated aging. For two types of PAHs analyzed in participants’ urine samples (1-hydroxypyrene and 9-hydroxyphenanthrene), each one-unit increase was associated with an approximately six month-increase in DNA methylation age. The effects were particularly evident among coke-oven workers exposed to PAHs on the job.

Individuals can limit their exposure to PAHs, Dr. Liang said, by quitting smoking, avoiding cooking at high temperatures, and ensuring that ovens and other gas-burning appliances are well-ventilated.