Dr. Michelle A. Williams, dean of the Harvard T.H. Chan School of Public Health, has been selected as the recipient of the First KP Chen Memorial Lecture organized by the National Taiwan University (NTU) College of Public Health (CPH) and the KP Chen Preventive Medicine Foundation. Dr. Williams delivered the speech at the “Conference in Memory of the 100th Birth Anniversary of Professor KP Chen,” held on 20 November 2017 at NTUCPH in Taipei. The conference was attended by six speakers and 12 discussants from Taiwan, the U.S., Japan, Malaysia, and Thailand, and more than 300 participants. 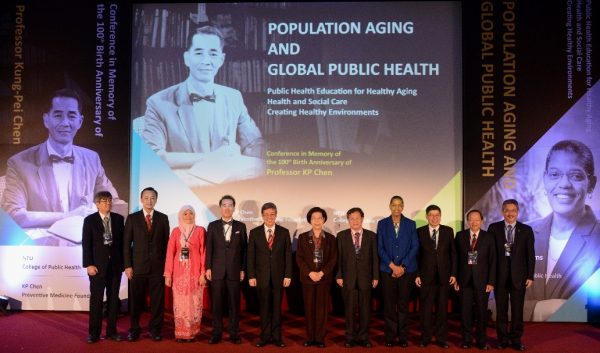 Professor and Dr. Kung-Pei Chen was a founding father of Taiwan’s public health education. He served as the director of the Institute of Public Health at NTU for 17 years. Under his leadership, the Institute cultivated many public health professionals, educators, and researchers. This formidable force of public health has helped Taiwan to solve many major public health issues, including the identification of arsenic intoxication as the cause of black-foot disease, iodization of salt to prevent goiter, and advocacy of National Health Insurance (eventually leading to its implementation in 1995). The Institute was expanded to CPH in 1993. Notably, NTUCPH has just been accredited by the Council on Education for Public Health (CEPH) in July. The NTUCPH is the first CEPH-accredited school of public health in Asia, also the first one outside North America.

In memory of Professor Chen’s 100th Birth Anniversary, NTUCPH hosted a conference on population aging and global public health. The conference was held along with the First KP Chen Memorial Lecture supported by the Foundation. Vice president of Taiwan, Dr. Chien-Jen Chen, former dean of NTUCPH and himself the lecturer of the 2008 Cutter Lecture, welcomed the participants in the opening ceremony. Dean Michelle A. Williams’ speech was entitled “The Future of Aging: A Public Health Perspective.” The lecture is special not just because Dean Williams is a world-known leader and researcher in public health, but also because Prof. KP Chen was strongly connected to Harvard University during his career. Prof. Chen was a visiting scholar at Harvard University in 1960. In 1970 he was invited back to Harvard to deliver the 113th Cutter Lecture on Preventive Medicine.

In her speech, Dean Williams reflected on the future of aging through a public health lens. At Harvard Chan School, Dean Williams has made aging and longevity one of the topic research priorities. She discussed the research findings from some of the seminal work done at the Harvard Chan School, and emphasized the need to combine laboratory research and population sciences to make healthy aging a global reality.

In the session on public health education, Dean Chang-Chuan Chan from NTUCPH spoke on public health education at NTUCPH in the context of demographic transition over the past several decades. He focused on the need to teach smarter – rather than teach more – in the modern era. In the session on health care and social care, Dr. Benjamin Chong (grandson of Prof. KP Chen) from University of Texas Southwestern Medical Center, discussed major skin diseases in the aging population. Dean Emeritus Shunichi Fukuhara from the School of Public Health of Kyoto University made the case for the new roles of primary care team in health aging. In the session on healthy environment, vice dean Dr. Norito Kawakami from the School of Public Health of the University of Tokyo discussed the importance of a healthy workplace to an aging population. Dean Kee Seng Chia from Saw Swee Kock School of Public Health of National University of Singapore talked about the life-course approach for health promotion in an aging population. Prof. Wei J. Chen, chair of the organizing committee, concluded that a successful public health approach towards healthy aging should address all of its biological, social, and cultural dimensions.

Learn more about the KP Chen Memorial Lecture and the whole conference: