According to data from the Occupational Safety and Health Administration, there are approximately 120,000 farm injuries in Iowa per year, resulting in an estimated annual 1,200 fatal injuries. Ms. Kayla Faust, PhD student in occupational and environmental health at the University of Iowa College of Public Health, is attempting to change that statistic through the use of a specialized driving simulation.

As an undergraduate research assistant, Ms. Faust began working with the university’s National Advanced Driving Simulator, one of two such simulators in existence and the only one that is not privately owned. She said she became fascinated with the simulation after assisting with an impaired-driving study and decided to implement the technology in her research.

“I have always loved and been involved with agriculture even though it is such a dangerous industry,” she said. “While studying at the driving simulator, I realized the safety benefits of simulated driving research could be extended to farm equipment such as tractors.”

Ms. Faust uses the Mini-Sim, a smaller version of the large-scale simulator. Ms. Faust’s simulation uses virtual reality to put farmers on rural roads, fields, and driveways while simulating the feeling of being in the cab of a farm vehicle. She said she hopes to use the data in order to improve vehicle safety and to prevent farming accidents that may arise in dangerous yet unavoidable situations.

“Kayla’s project broadly aims to improve rural transportation safety,” deputy director of the driving simulator Mr. Omar Ahmad said. “She has co-developed a set of scenarios that she is using to collect data on farm-tractor drivers, and the data from her study could be used to improve farm vehicles and rural roads.”

In order to achieve accurate data, Ms. Faust works to improve upon the tractor simulator, and she seeks tractor drivers to comment on the accuracy of the simulation. She is looking for farmers over the age of 65 to drive the simulator and hopes to have at least 100 individuals participate in the study.

“The more farmers who make improvement suggestions, the better our simulator will be,” Ms. Faust said.

According to the driving-simulator website, it is a “self-sustained transportation safety research center” housed in the UI College of Engineering. Research is funded by government and industries, and it uses the funding to conduct research for private and public sectors by more than 40 specialized faculty, staff, and students. The simulator is also being celebrated for its 20th year in use. Students from across a wide variety of departments use the technology for their work, said driving-simulator director Dr. Daniel McGehee.

“It’s a great application to show how our students are using the greatest advancements in technology in their research,” Dr. McGehee said. “It shows that the UI is at the cutting edge in research using these simulations.” 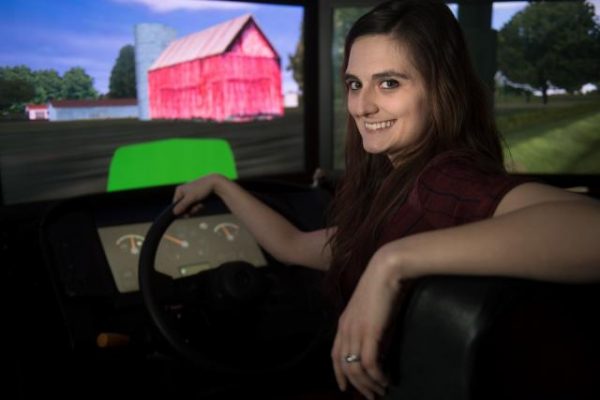