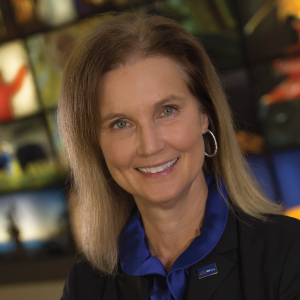 Dr. Arnett, dean of the University of Kentucky College of Public Health and professor of epidemiology, received the prize during Sunday’s opening of the American Heart Association Scientific Sessions 2017, a premier global exchange of the latest advances in cardiovascular science for researchers and clinicians, which was held at the Anaheim Convention Center. The annual prize honors important studies of cardiovascular disease patterns in populations.

“Throughout her praise-worthy career, Dr. Arnett has worked to integrate molecular science with population studies, using her extensive training in both disciplines, to produce broadly relevant results for the health of the public,” said Dr. John Warner, president of AHA.

“Her personal success is evident in both her publication record and her funding,” he noted.. “She has published more than 500 peer-reviewed reports in high-impact journals in multiple fields, including seminal work she has led identifying genetic biomarkers and in risk prediction, hypertension, heart failure, imaging and methods development.”

An NIH-funded researcher for 20 years, Dr. Arnett studies genes related to hypertensive disorders and organ damage that results from hypertension. She has published more than 450 peer-reviewed papers and two books.