An interdisciplinary team from the University of Kentucky published “Deep Vein Thrombosis Complicated by Spontaneous Iliopsoas Hematoma in Patient with Septic Shock” in the American Journal of Case Reports. Dr. Lili A. Buzsaki, resident in Preventive Medicine in the University of Kentucky College of Public Health, collaborated with faculty from the UK Gill Heart Institute on the case study and publication. 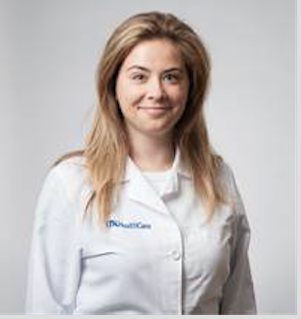 Hemorrhage in the retroperitoneal space can present as a rare, life-threatening event. It is commonly seen as a complication of femoral artery catheterization or after pelvic and lumbar trauma. Other conditions that can lead to retroperitoneal hemorrhage are ruptured abdominal aortic aneurysm and bleeding from an underlying condition involving the kidneys or adrenal glands. Spontaneous cases, especially with underlying coagulopathies or platelet dysfunction, have been very rarely reported.

The publication reviews the case of an elderly man presenting with altered mental status of unknown etiology, in addition to hemodynamic instability, presumably due to septic shock, without any overt signs of bleeding. After an initial exam revealed lower-extremity edema and decubitus ulcers, a venous Doppler was performed, which revealed extensive deep vein thrombosis. It was unknown whether the sepsis or DVT occurred first. Therapeutic anticoagulation with heparin was subsequently started. On hospital day 4, a CT abdomen with contrast identified retroperitoneal hematoma after the patient’s hemoglobin lowered without any overt signs of bleeding. The diagnosis of spontaneous retroperitoneal hematoma was one of exclusion and posed a therapeutic dilemma (conservative versus invasive management).

The authors conclude that sepsis-related coagulopathy and heparin use in an elderly patient predisposed him to an iliopsoas hematoma. They further note that spontaneous retroperitoneal hematomas are difficult to diagnose, particularly in patients with altered mental status, therefore physicians should have a high degree of suspicion in any patient with a sudden drop in hemoglobin and abrupt changes in vital signs.