Dr. Helen Hopp Marshak, dean of the school, stepped to the podium once the candidates marched in, welcoming attendees and inviting the audience to join her in welcoming the Loma Linda University School of Public Health’s class of 2018 to the event.

Dr. Richard Hart, the university’s president, greeted the soon-to-be-graduates and announced that the students honored in the ceremony hail from 25 different nations, adding that diversity in the student population enhanced the richness of the learning environment. After Dr. Hart’s remarks, Dean Marshak and Dr. Ronald L. Carter, the university provost, invited several individuals to the podium to receive awards. The honorees included:

President’s Award — Ms. Marissa Lee: Ms. Lee, who received an MPH degree in nutrition later in the ceremony, was announced as winner of the President’s Award for the School of Public Health on the basis of her superior academic performance and dedication to community service. Ms. Lee was cited for working to improve living conditions for migrants during an internship with the United Nations in Switzerland.

Dean’s Award, Master of Business Administration — Mr. Perry Ashilevi: Mr. Ashilevi, who received an MBA degree in healthcare administration later in the ceremony, was announced as winner of the Dean’s Award because of his commitment to community service activities. He champions the values of Loma Linda University Health.

Dean’s Award, Master of Public Health — Ms. Annette Costa: Ms. Costa, who received her MPH degree in research epidemiology later in the ceremony, was announced as winner of the Dean’s Award because of her commitment to keeping people from dying from preventable diseases. Born in Angola, Ms. Costa has worked in a variety of positions in Africa and the Inland Empire to end human trafficking, reduce pollution, and enhance the quality of life for neonatal infants.

Dean’s Award, Doctoral — Dr. Danjuma Daniel; Dr. Daniel, who received his DrPH degree in health policy and leadership later in the ceremony, is a healthcare professional who specializes in operations and finance for faith-based, non-profit healthcare systems. His backgrounds in business administration and public health have helped him navigate complex situations at hospitals in developing countries.

Alumnus of the Year Award — Mr. Adam Tahiru: Mr. Tahiru, who received an MPH degree in international health from the school in 2003, models a mature understanding of the principles and practice of public health and preventive medicine. Currently a commander in the U.S. Public Health Commissioned Service Corps Services, he is a senior public health analyst, management and program officer. 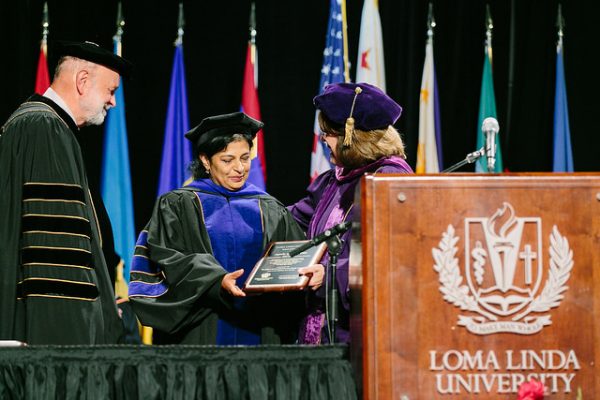 Now in its 51st year, the school has graduated 7,461 health professionals since its founding in 1968. The School of Public Health is the only Loma Linda University school whose graduates currently serve as faculty members in all eight of the university’s schools.