Research has found that educational media can positively impact young children, but few studies have been conducted in developing countries. Newly published research led by University of Maryland School of Public Health research professor Dr. Dina Borzekowski, with the department of behavioral and community health, in the Journal of Applied Developmental Psychology helps to address this with a study involving a locally-produced Tanzanian children’s show called Akili and Me. 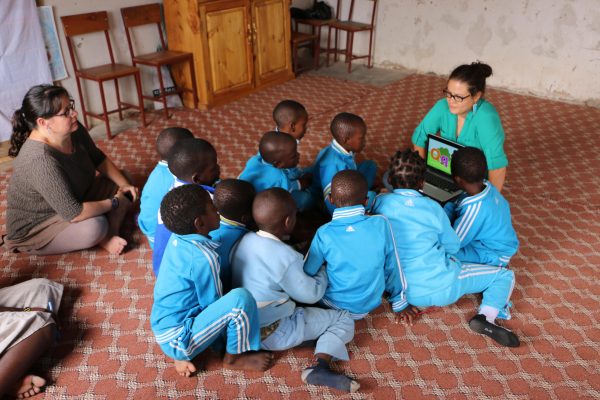 [Photo: Dr. Dina Borzekowski (at left) looks on as Tanzanian children watch Akili and Me]

Researchers investigated the impact of the animated educational series in Morogoro, Tanzania, and found that exposure to the show significantly improved drawing skills, shape knowledge, number recognition, counting, and English skills. “Young and vulnerable children can benefit from a locally-produced educational program,” the study finds. “Media interventions should be encouraged as they effectively and efficiently alter school readiness.”

Dr. Borzekowski says it is important to have media that is “culturally and age-appropriate for kids in Sub-Saharan Africa, from skin color to dress to the animals on the program.” Akili and Me is clearly a local show, not an American or a Chinese show, she says. The show, produced by Dar es Salaam media company Ubongo Kids, went on-air shortly after Dr. Borzekowski’s research project was completed, “so we were able to run a pure experiment.”

Subsequently, she conducted similar research in Rwanda ahead of that country’s launch of a version of Akili and Me translated into a local dialect. The results of that research will publish later.

Only 42.4 percent of Tanzanian children are enrolled in pre-primary education. Dr. Borzekowski notes that even those children who do attend pre-school face a massive shortage of trained teachers — sometimes a single teacher is responsible for as many as 60 small children — and a lack of instructional materials and even chairs, tables and desks.

The researchers acknowledge that educational television is not a replacement for a solid pre-school experience, but assert that educational media can serve as a stand-in by stimulating and supplementing learning. “Using other approaches to get children ready for school is critical, given the shortage of teachers,” Dr. Borzekowski said.

Researchers identified children aged three to six years who were not yet enrolled in pre-school, and provided parents with a list of videos that children might see during the study, without drawing specific attention to Akili and Me. Researchers assessed participating children at baseline and immediately following the intervention, which lasted four weeks. Interviews were conducted in the local dialect of Kiswahili.

Children who watched Akili and Me gained valuable and foundational educational content above and beyond other factors associated with achievement like existing knowledge and greater maturity. The greatest effects of exposure were observed for the outcome of counting, a measure that was featured and repeated often in the Akili and Me videos. The next greatest effect was seen with English skills.

“We often see the bad in media, but it still offers great potential for young people and their parents, especially in difficult environments,” Dr. Borzekowski says.

“A quasi-experiment examining the impact of educational cartoons on Tanzanian children” was published in The Journal of Applied Developmental Psychology.