Social norms, those unspoken rules about what is acceptable behavior, tell us what we think others are doing and what others think we should be doing. Social norms influence how we dress, how we greet one another, the words we use, and — new research from Maryland shows — whether we will get an annual flu shot. 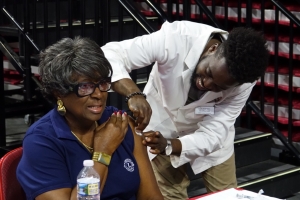 Dr. Quinn, who is senior associate director of the Maryland Center for Health Equity, and her colleagues explored the impact of social norms on flu vaccine acceptance in a novel way. First, their study is one of the only to explore racially specific norms. Further, they are one of the first to examine both descriptive (what others do) and subjective norms (what others think one should do).

In assessing descriptive norms around flu vaccination, both the qualitative and quantitative findings indicated that respondents believed about half the population receives a flu vaccine, which reflects the reality that just under half of all adults receive the vaccine.

The authors conclude with some guidance for public health researchers and health care practitioners to help increase flu vaccine uptake for African American and white adults. “Perceived descriptive norms about flu vaccination are weak, but realistic, reflecting the reality that just under half of all adults receive a flu vaccination, with even lower uptake among African Americans. More importantly, we identified a greater association between subjective norms and vaccination behavior, extending across both races. This finding suggests that increasing communication among loved ones about flu vaccine may be an effective tactic to increase flu vaccination.