Black adults are significantly less likely to be immunized for seasonal influenza when compared to whites. This persistent disparity contributes to increased influenza-related morbidity and mortality in the African American population. Most scholarship on vaccine disparities has compared whites and blacks, but a new publication led by University of Maryland School of Public Health Dr. Sandra C. Quinn (professor, department of family science) shifts the focus to explore flu vaccination differences within the black population. 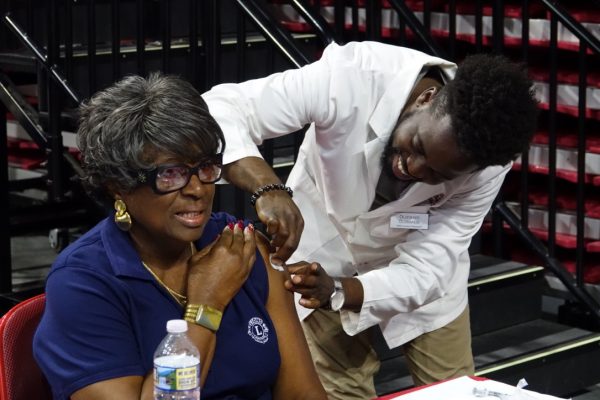 [Photo: A women receives a flu shot at the Mid-Maryland Mission of Mercy and Health Equity Festival in September.]

Dr. Quinn and her colleagues utilized results from their 2015 nationally representative survey of U.S. black adults. They investigated which demographic factors (age, gender, education, and income) are significantly associated with differences in racial factors and with key vaccine-related variables for African Americans. They also identified associations between flu vaccine behavior in the past five years and possible predictors for vaccine uptake.

Additionally, they were able to distinguish four distinct groups of vaccine takers based on their behavior in the past five years: always, most years, once/twice, and never. They were able to examine demographics, racial factors, and vaccine-related factors for each group. Factors that were significantly different among these groups and that offer the greatest possibility for improving uptake include: trust in the vaccine, perceived disease risk, perceived risk of vaccine side effects, knowledge, vaccine attitudes, subjective norms, barriers, and confidence.

These results emphasize the need to consider the heterogeneity within the black population when approaching vaccine disparities. By identifying different factors contributing to vaccine uptake as well as distinguishing between behavioral groups, messaging can be developed to target specific groups based on individual concerns, rather than the entire group or specific social categories such as lower income groups. “We were very interested in a cutting edge approach to examining these disparities,” said Dr. Quinn, who is senior associate director of the Maryland Center for Health Equity, said.  “Working with Public Health Critical Race praxis as our guide, we sought to explore how the lived experience of being African American in our society could also shape vaccine attitudes and behaviors.  We believe this article sets a new expectation for other researchers to consider when they seek to understand and eliminate disparities.”

The article, Breaking down the monolith: Understanding flu vaccine uptake among African Americans, is available online now as part of the April 2018 issue of Social Science & Medicine – Population Health.