On November 11, The American Medical Association (AMA) honored University of Maryland School of Public Health dean and former Surgeon General of the United States, Dr. Boris D. Lushniak, with the Distinguished Service Award for his contributions to the field of public health. Granted by the AMA Board of Trustees and endorsed by the AMA House of Delegates, this award honors a member of the AMA for meritorious service in the science and art of medicine. 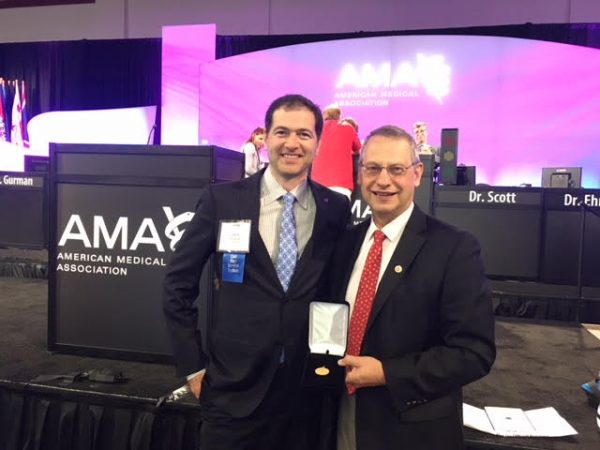 “A dedicated and indefatigable leader, Dr. Lushniak led critical missions at home and across the globe for the CDC, spearheading response efforts to everything from skin cancer to Hurricane Katrina,” said AMA board chair Dr. Gerald E. Harmon. “He never falters when faced with hard work or dangerous situations, but rather sees an opportunity to make a difference during critical moments that affect our nation and the globe.”

Dean Lushniak played an active role in government service for nearly 30 years, having served as acting surgeon general from July 2013 to December 2014. He also held the position of deputy surgeon general from 2010 to 2013 and from 2014 to 2015, as well as assistant commissioner for counterterrorism policy for the U.S. Food and Drug Administration from 2004 to 2010. In January of 2017, he became dean of the UMD School of Public Health.

During his time as acting surgeon general, Dean Lushniak participated in disaster responses in various parts of the world, was part of the Centers for Disease Control and Prevention / The National Institute for Occupational Safety and Health team at Ground Zero, and oversaw much of the federal government’s planning for bioterrorism defense in the years following the Sept. 11 attacks. Significantly, he traveled to Liberia to command the only U. S. Government hospital treating Ebola patients during the Ebola crisis in 2015.

“It wasn’t in his nature to command the operation from a desk in Washington – he had to be out in the field donning protective gear with his team to help care for health care workers infected with Ebola in Africa,” said AMA Chair-Elect Dr. Jack Resneck, Jr. “His willingness to accept personal risk and help suffering patients is an inspiring story of dedication, integrity and true leadership.”

Dr. Lushniak received his medical degree from Northwestern University and his masters of public health degree at Harvard University. He is board-certified in dermatology and preventative medicine. The AMA presented Dr. Lushniak the award during the opening session of the 2017 AMA Interim Meeting in Honolulu. He became dean of the University of Maryland School of Public Health in January 2017.