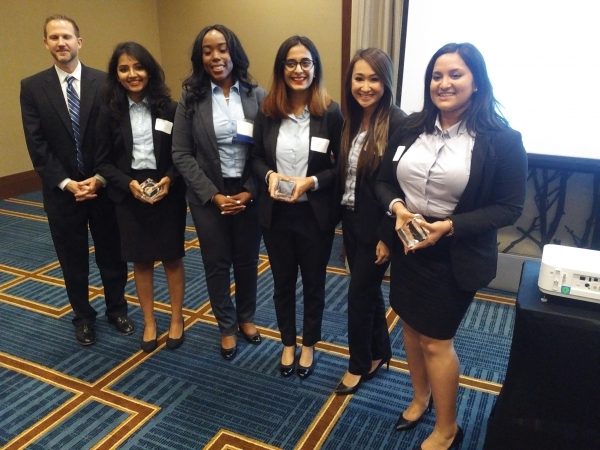 [Photo: The North Texas winning student team with their executive coach Mr. Paul Aslin,Senior Vice President and Chief Population Officer with Wise Health System, who shared on LinkedIn, “For the second year in a row, I had the privilege of being the executive coach to the winning team of the North Texas ACHE Student Case Competition; for both years, the winners were from UNTHSC.”]

Tasked with a real-world challenge, much like projects they will take on in their future careers as healthcare leaders, teams from UNTHSC and other universities went head to head on a case for “Humana’s Bold Goal: 20 Percent Healthier by 2020.”

The case focused on Humana’s plan to improve health in the communities it serves and make it easy for people to achieve their best health. Students were asked to develop and present a proposal for measuring the business performance and clinical progress along the way.

Texas Institute for Surgery President David A. Helfer, who served as lead judge for the competition, was extremely complimentary of the students’ work.

“The initial written submission by UNTHSC’s winning team was exceptionally well crafted, organized and on point with the assignment.  As such, they were selected to move on to the live presentation round,” he said.

“As they launched their presentation, it became clear that they had quickly learned how to work with one another, and both the content and delivery were nearly flawless.  They were well prepared to answer the judges’ questions and even had back-up material that was not part of the main presentation, suggesting critical thinking and planning skills,” he said. “We understand that all the groups worked hard to reach the final round, but this team from UNTHSC stood out.”

The win has special significance for Ms. Vashishtha, who has presented at three case competitions this year, regionally, statewide and nationally. In April, she was on the UNTHSC team that won for their “Transforming Galveston” proposal at the George McMillan Fleming Center for Healthcare Management’s annual student challenge event in Houston.

“This time, we were working on two case competitions at once; participating on a national level really helped improve our presentation skills and gave us a learning experience we could bring back to the North Texas competition,” she said. “The judges were impressed with the way we presented Humana’s Bold Goal in relation to a patient story. They also liked our approach, acting as consultants, and the way we developed proposal materials and business cards that visually aligned with Humana’s brand.”