The award, which annually recognizes an outstanding scientist for excellence in epidemiologic practice or research, was presented to Dr. Burke in San Diego at the 2018 APHA Annual Meeting & Expo.

“Over the course of my career, it has been my great good fortune to work with extraordinary colleagues at the world’s leading centers of epidemiology, not only at the University of Pittsburgh, but at the Walter Reed Institute of Research, Harvard and Johns Hopkins. This award is as much a testimony to these great institutions as it is to me personally,” said Dr. Burke, who also holds the Jonas Salk Chair of Population Health at Pitt. “I find great personal satisfaction in the knowledge that my life-long research efforts have helped to improve the health and well-being of mankind.”

Awardees are chosen for their contributions to the improvement of human health or substantial reduction in burden of disease through innovations in public health practice, based on clear epidemiologic foundations or implementation of epidemiologic approaches to the solution of health problems. Their contributions are practical, explicit and applied, rather than theoretical or implicit.

Several experts in the field of epidemiology signed a nomination letter recommending Dr. Burke for the award, citing his work as “essential in driving the appropriate use and knowledge about vaccines to public health and planning,” and saying his recent effort on the opioid epidemic “demonstrates the value of epidemiologic methods as the foundation of public health practice and prevention.”

“This award, one of the oldest in the field, is given in recognition of enduring contributions to public health through epidemiologic methods and practice,” said Dr. Tiffany Gary-Webb, chair of the awards committee and chair-elect of the APHA epidemiology section. “Dr. Burke’s research and leadership in the profession are fine examples of the ideals embodied in the Snow Award.”

More on the award 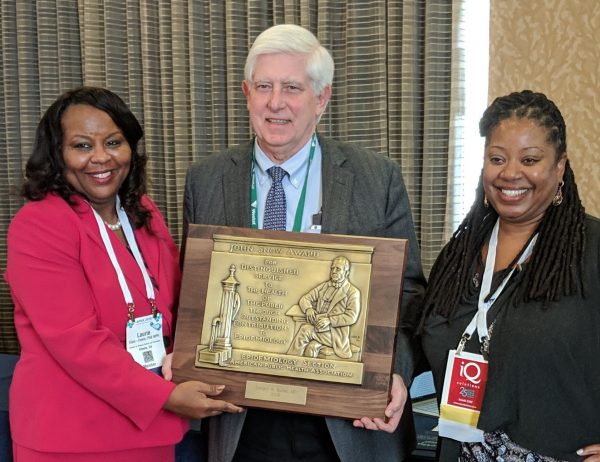