The past quarter century has brought a striking decline in earlier-than-expected deaths among blacks in the U.S., according to a first-of-its-kind analysis performed using an extensive death records database maintained by the University of Pittsburgh Graduate School of Public Health.

Declining heart disease, HIV and cancer death rates, particularly among black adults in their 30s and 40s, are driving the improvement, according to the study, which is published in a recent issue of PLOS ONE and funded by the Robert Wood Johnson Foundation. 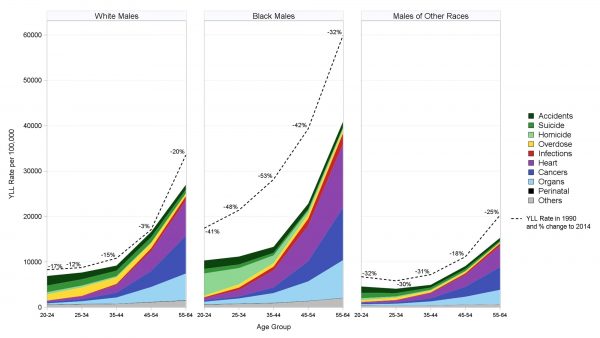 “We were surprised by these findings because they demonstrated such dramatic improvement,” said senior author Dr. Donald S. Burke, Pitt Public Health dean and UPMC-Jonas Salk Chair of Global Health. “It is very welcome news that public health interventions appear to be working to improve health and save lives. Unfortunately, despite the improvement, there is still a substantial racial gap in early death rates, but if current trends persist, this gap should continue to narrow.”

The calculations were made using data extracted from the Mortality Information and Research Analytics (MOIRA) system, which is a repository and retrieval system housed at Pitt Public Health since 1980. It contains detailed mortality data obtained from the National Center for Health Statistics and the U.S. Census dating back to 1950.

“Our study shows that racial disparity in health outcomes is not inevitable. It can change, and the gap can be narrowed,” said lead author Dr. Jeanine M. Buchanich, research associate professor in Pitt Public Health’s Department of Biostatistics. “Now we need to pinpoint what led to these improvements. In the future, we plan to add geography to our analysis to even better direct public health resources, as well as determine if any areas of the U.S. have been more successful in preventing early death and might have lessons that could be extrapolated to other regions.”

Additional authors on this research are Dr. Shannon M. Doerfler, currently at Duke University but previously at Pitt, and Mr. Michael F. Lann and Dr. Gary M. Marsh, both of Pitt Public Health.

May 3, 2018 "Kentucky: Milkshakes Bring all the Science to the Lab" May 3, 2018 "UNC-Led Global Study Examines Relationship of Prostate Inflammation and Prostate Cancer"