RADM Jerrold M. Michael Passes Away at the Age of 90

This week, on July 24, 2018, the U.S. Public Health Service Commissioned Corps lost one of our heroes and staunchest supporters.  Rear Admiral (RADM) Jerrold M. Michael passed away at the age 90 years old in Maryland.

RADM Michael began his service to our nation immediately after high school when he enlisted in the U.S. Navy and served as a Hospital Corpsman in World War II. Upon completing his education at The George Washington University and The Johns Hopkins University, RADM Michael began his Commissioned Corps professional career as an engineer, starting as an Ensign and rising to the rank of RADM (upper half).  During his 20-year Commissioned Corps service, his assignments included Centers for Disease Control and Prevention, Arizona Public Health Department, Office of the Surgeon General, and Indian Health Service. 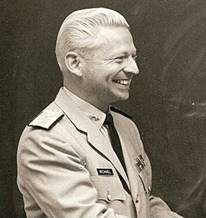 Upon retirement from the Commissioned Corps, he continued to lead and mentor in academia for 39 years.  He accepted a position at the University of Hawaii School of Public Health, and for 25 years served as Professor and then Dean of the School.  He returned to Washington, DC in 1995 and quickly resumed his academic leadership working at his alma mater, The George Washington University, where he assisted in the chartering of a new school of public health in 1997 (George Washington University Milken Institute School of Public Health).

He was a courageous leader and provided quality health services to the people he was charged to serve.  He also was passionate about academic and professional mentorship, and he encouraged his students to pursue a lifelong commitment to service within public health.  Many of his students entered the PHS Commissioned Corps.

RADM Jerrold M. Michael was an American Public Health Leader, patriot, hero, mentor to many, and friend to all.  The Officers of the United States Public Health Service Commissioned Corps salute you and thank you for your service to our nation!