Dr. Leslie Kantor, Rutgers School of Public Health professor and chair of the department of urban-global public health, was awarded the Douglas Kirby Award from the Association of Planned Parenthood Leaders in Education (APPLE) for her work in the field of sex education. The Douglas Kirby Award is given annually to a researcher whose work evaluating interventions to improve sexual health has helped to advance the field or whose research has provided new insights that are critical to improving sex education programs. 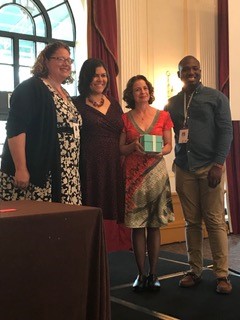 Dr. Kantor is a respected leader in the field of sexual and reproductive health who has developed interventions, advocated for policy, and conducted innovative research. Her research related to sex education includes multiple national surveys on supporting sex education, identifying the needs of LGBTQIA (lesbian, gay, bisexual, transgender, queer or questioning, intersex, and asexual or allies) and African American and Latino youth, and examining family communication about sex and sexuality.  Before joining the Rutgers School of Public Health, Dr. Kantor was the vice president for education at Planned Parenthood.

“I am particularly honored to receive this award as it is named for my colleague and mentor, Dr. Doug Kirby, whose work in identifying the characteristics of effective sex education programs catalyzed a focus on evidence-informed and evidence-based approaches to improving adolescent sexual and reproductive health.”

The Douglas Kirby Award from APPLE also serves as a testament to Dr. Kantor’s continued connection to Planned Parenthood and the field of sexual and reproductive health. “I look forward to continued collaborations with my colleagues from Planned Parenthood across the country as well as to fostering numerous new partnerships with community based organizations in New Jersey.”

Dr. Kantor received the Award on April 26, in Washington D.C.

May 16, 2018 "Columbia’s Professor Honored by Heritage Provider Network" May 16, 2018 "NYU Assistant Professor is Published in the Current Atherosclerosis Reports"