Watch out, Rocky. There’s a new Bull on campus and she’s melting hearts and gaining fans wherever she goes.

Meet Anja, a 7-month-old black lab and guide-dog-in-training who calls the University of South Florida College of Public Health (COPH), Office of Research her weekday home.

Anja is one of about 250 puppies born each year at Southeastern Guide Dogs, a nonprofit organization based in Palmetto, FL. Southeastern breeds and trains guide and service dogs for the visually impaired as well as veterans needing emotional support. Puppy raisers keep the dogs for approximately a year, exposing them to different environments and social situations, offering positive reinforcement and working with them on basic obedience.

“She’s pretty relaxed in the office,” noted Mr. Cullum, who is raising Anja with his wife and 9-year-old daughter. “She curls up in a ball and takes long naps, and when she wakes up we go outside for a break. During lunch we do training. I’ll find a building she hasn’t been in before so she can experience new things, and we continue to work on basic obedience skills.” 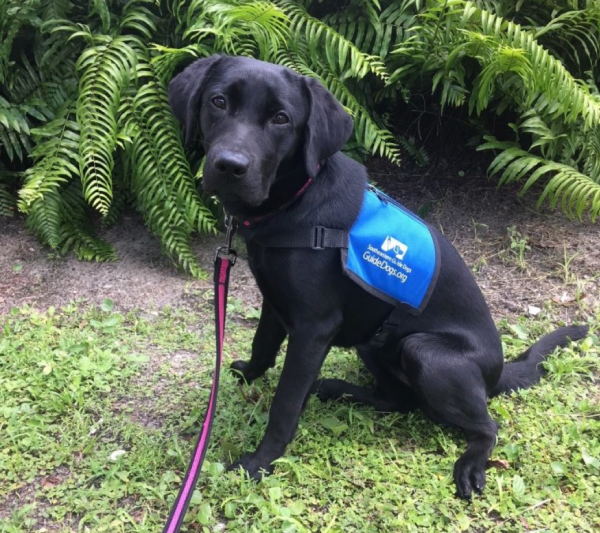 Twice a month Mr. Cullum and Anja meet with other area puppy raisers to discuss training tips and program protocol and to take the dogs on group outings to increase their socialization. “This week we’re headed to Michael’s craft store,” he reported. “There’s a time commitment involved, but it’s manageable,” he added.

What does take time, said Mr. Cullum, is getting ready to leave the house. “Having Anja is like having a toddler,” he laughed. “You have to get her dressed [in her service coat], give her snacks and water, make sure she uses the bathroom. You have to factor in all that time.”

Mr. Cullum’s raised two other labs for Southeastern, neither of which became guide or service dogs (although they did end up becoming much-loved pets for his family). His first lab was rejected for being too food driven. The second one developed seizures and was let go for medical reasons.

According to Mr. Cullum, Anja has all the makings of a great guide dog. “She’s really relaxed and very focused. We’re only a few months into her formal training, but she is doing amazing.” 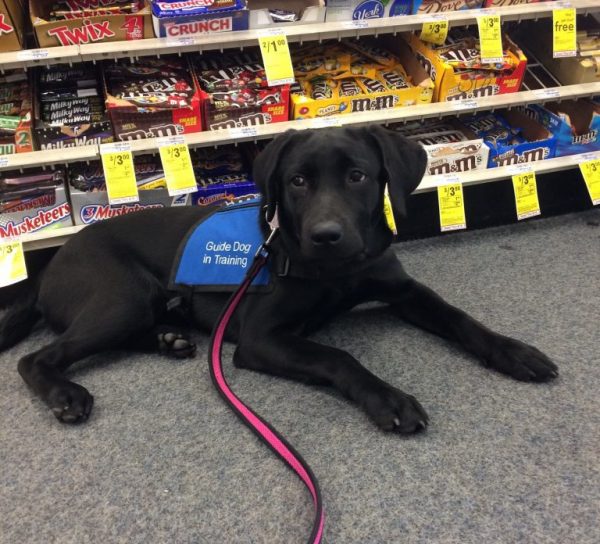 [Photo: Anja in candy aisle of a local CVS. Even the lure of M&Ms can’t distract this superhero-in-training. (Photo courtesy of Mr. Brian Cullum)]

When her coat’s off (service dogs wear coats to indicate they are on the job and working and should not be disturbed), Anja acts like a lot of other puppies—she plays, looks for things to teethe on and rolls over for belly scratching.

Anja will eventually return to Southeastern for more intensive training and, ultimately, to be matched to her forever owner. Saying goodbye to her won’t be easy, but Mr. Cullum keeps the bigger picture in mind.

“Being a puppy raiser is a great way to give back to the community, but letting Anja go will be hard. It helps to know that there’s a silver lining and that she will go on to do great things for someone in need.”

“And,” he added, “there will always be another puppy that needs raising.” 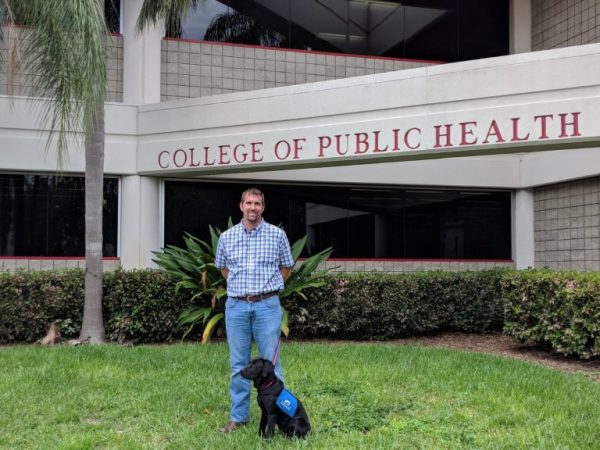