The paper was published recently in the journal Integrative and Comparative Biology.

The article notes that light pollution, or the presence of unnatural levels of light at night, now covers nearly 20 percent of the U.S. land mass at intensities that can be seen from space. In addition, 99 percent of this country’s population lives under light polluted skies.

“There’s been a lot done on the negative effects that light pollution can have on one’s health and behavior,” said Ms. Kernbach, who wrote the paper with several research colleagues, including COPH professors Drs. Lynn Martin and Thomas Unnasch. “But there hasn’t been much done on how it impacts disease. Our main goal was to summarize the many paths by which light pollution can induce circadian and circannual rhythm disruption and affect infection coping mechanisms.”

The paper highlights both human and wildlife studies. 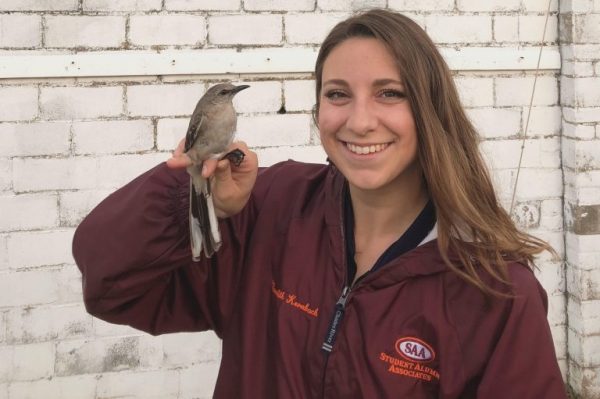 [Photo: Ms. Meredith Kernbach with Northern Mockingbird, a species that commonly resides in or around light-polluted habitats. (Photo courtesy of Ms. Kernbach)]

For example, individuals exposed to dim light at night can have insufficient levels of melatonin, a naturally occurring hormone that increases when it’s dark and helps signal the body to sleep. This lack of melatonin can, in turn, affect the immune system and the body’s response to disease and inflammation.

What’s more, said Ms. Kernbach, there is clear evidence that dim light at night extends nighttime activity in birds by several hours into the morning. This increase in activity means more interaction among species is not only possible, but probable — and that has implications for the spread of diseases like the West Nile Virus.

“Light pollution can cause confusion in the body,” continued Ms. Kernbach. “Dim light cues can throw the body’s rhythms out of whack, and that can affect immune function, reproductive hormones and metabolism.”

And those who live in urban areas aren’t the only ones at risk.

The good news, says Ms. Kernbach, is that light pollution is a “fixable problem.”

There is a lot of work being done on the use of timed or directional lighting and lights with hues that more closely mimic natural light.

“This is definitely something we can work to solve,” said Ms. Kernbach, who hopes to go into academia or disease surveillance once she graduates. “Being able to make a significant contribution to the field of disease ecology is why I wanted to get involved in light pollution work in the first place.”