For a century, researcher after researcher has tried to grow Plasmodium vivax (P. vivax), the parasite that causes the most widespread type of malaria, in petri dishes continuously, in hopes of studying how it infects humans. None have succeeded.

The parasite just won’t grow in the laboratory for prolonged time. So, scientists at the University of South Florida (USF) Center for Global Health and Infectious Diseases Research found a different strategy.

They teamed up with the Armed Forces Research Institute of Medical Sciences (AFRIMS,) which studies infectious disease including malaria. In a series of studies, the team became the first to publish the early stages of the P. vivax transcriptome while elucidating the interactions between the parasite, the carriers (mosquitoes) and hosts (humans). Their study appeared recently in the journal Scientific Reports.

“With this approach, we didn’t grow it, but used parasites isolated from infected patients,” said Dr. Rays Jiang,  assistant professor of global health at the University of South Florida College of Public Health, and a co-senior author on the study. “With genomic technology we sequenced the parasite forms from the mosquito stage to the early human liver stage.”

Most people know malaria as a disease that affects the blood, but the parasite doesn’t go straight from the mosquito to wreaking havoc on a human’s blood. As soon as the parasite touches the skin, it begins to adapt. Once it enters the human’s bloodstream, it heads to the liver. There, it begins to multiply.
“One parasite goes in, tens of thousands come out,” Dr. Jiang said. “If the malaria parasite can’t go through the liver, it doesn’t have the ability to harm you in your blood. It can’t grow. It must go through the liver.” Then, and only then, can it make humans sick.
Most treatments fight the parasite once it reaches in the bloodstream. Unfortunately, some vivax malaria parasites remain and can lie dormant in the liver up to five years, eventually reactivating and making the individual sick again. There is one treatment on the market since 1946 designed to act on the parasite that is found in the liver, but it cannot work for everyone. In some people, it can cause severe harmful effects. A second similar drug, recently approved, suffers from a similar limitation.

Scientists have long known that the parasite adapts based on cues from its environment. The parasite found in a mosquito is very different than the one that is found in a human’s blood. Most research has focused on preventing the activity of these two forms of the parasite — stopping the former from leaving the mosquito and clearing the latter from the blood of the human — but how the elusive parasite changes on its way to, and once it reaches, the liver is still a “black box.”

Since the parasite can’t be grown in the lab continuously, AFRIMS infected mosquitoes from the blood of malaria patients. The USF team released the parasites from these mosquitoes and exposed them to different in vitro environments similar to those they would encounter when infecting a human, such as the skin, liver, and blood. They then sequenced the parasite’s transcriptome in each of these states.

Despite looking fairly similar under a microscope, the molecular makeup of the parasite at each location is remarkably different, Dr. Jiang said. “We were surprised how adaptive the parasite is during this journey from mosquito to human.”

The P. vivax parasite has different vulnerabilities, and different potential targets for drugs, during each stage of infection, she added, “and we may have to kill them very differently.”

This latest USF malaria research follows other pioneering work published this spring by the global health infectious diseases research team.  In a study appearing in Science, also led by the Jiang lab and Adams lab at USF Health, the researchers for the first time identified the essential genes of the world’s deadliest parasite – the Plasmodium falciparum malaria parasite.  A second paper in Nature Communications detailed a new laboratory technique that will radically improve how scientists can study liver-stage malaria in vitro. 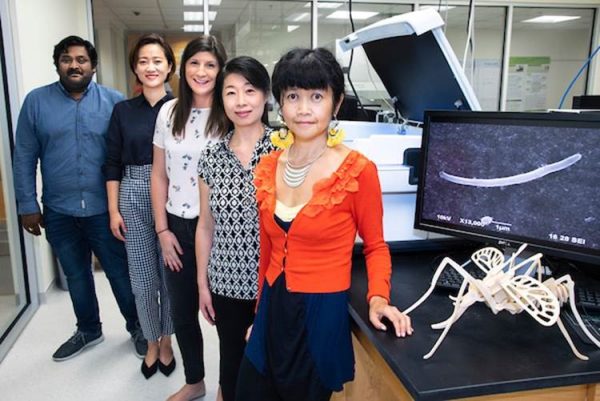