Infants who had been prenatally exposed to ultrafine particles (UFPs), which are tiny bits of air pollution, do not mount a robust immune response to house dust mites, according to research Dr. Natalie Johnson, assistant professor at the School of Public Health and co-director of the Program on Asthma Research and Education, published in the Proceedings of the National Academy of Sciences. 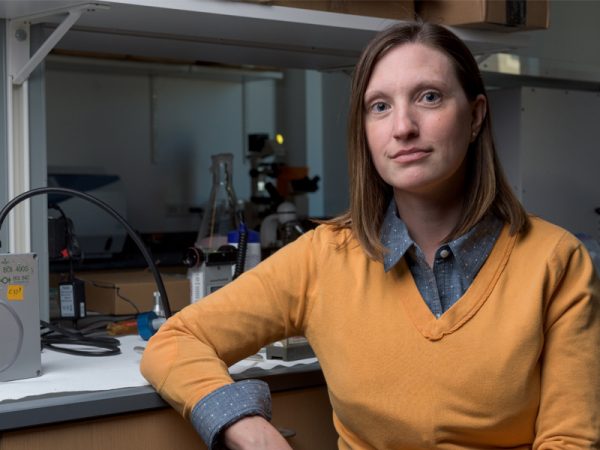 Dr. Johnson, who received the $2 million Outstanding New Environmental Scientist award from the National Institute of Environmental Health Sciences [NIEHS} last year, researches maternal air pollution exposure in correlation to infant and childhood asthma and respiratory tract infections. Some research done by a team in the Netherlands has suggested that having these kinds of infections at a young age can also lead to an increased risk of asthma later in life.

UFPs can cause cellular stress because it can travel from the lungs into the bloodstream and from there throughout the body. This may be particularly important during pregnancy because the developing fetus can be affected.

In this preliminary study, Dr. Johnson and her fellow researchers used a preclinical model to test whether mothers’ exposure to a mixture of UFPs present in air pollution affected their infants’ ability to mount an immune response. Dr. Johnson’s former doctoral student, Dr. Kristal Rychlik, helped conduct the study along with Mr. Jeremiah Secrest, a current doctoral student working with Dr. Renyi Zang, professor in the Texas A&M department of atmospheric sciences.

To test this, Dr. Johnson and her team had some pregnant animal models breathe only filtered air and others breathe air with UFPs. When the infants were born, they were all regularly exposed to house dust mites, a common allergen in humans. These two groups showed marked differences.

“We found that offspring that were prenatally exposed to the particles, when challenged with house dust mites, did not mount a response as high as those not exposed,” Dr. Johnson said. “We think that we uncovered a window of immune suppression, and they may be more susceptible to respiratory viruses in the future.”

Respiratory viruses and infections are common for infants, and their inability to mount a good immune response to pathogens could make them far more susceptible to becoming very ill.

That’s why Dr. Johnson and her team are now working on adding respiratory syncytial virus (RSV) to their model. Although often as mild as the common cold, RSV is the top cause of infant hospitalizations and can be deadly in some cases. Premature babies with underdeveloped lungs are likely to be more vulnerable to the more severe effects of the virus. Pediatricians have limited treatment options for RSV, especially in severe cases. Dr. Johnson’s current research will determine if infants prenatally exposed to UFPs are more susceptible to severe infection from this virus.

This research funded by the award will continue for four more years and will potentially spark new preventative measures for pregnant women to use in order to protect themselves and their children. For example, she is hopeful that something as simple as food could help.

“I come from a chemo-prevention background, where I worked to find how people can eat certain foods to prevent cancer development,” Dr. Johnson said. “Next year we’ll be working with broccoli sprouts in our model to find if cruciferous vegetables, like broccoli and cabbage, can prevent infant disease and lessen the severity of cellular stress. Ultimately, this research will be able to determine if supplementing a person’s diet could help lessen the impacts of often unavoidable pollutants.”