In recognition of World AIDS Day and Geography Awareness Week, students from the University of Georgia hosted a two-day Mapathon Marathon in November aimed at using spacial technologies to improve global public health. 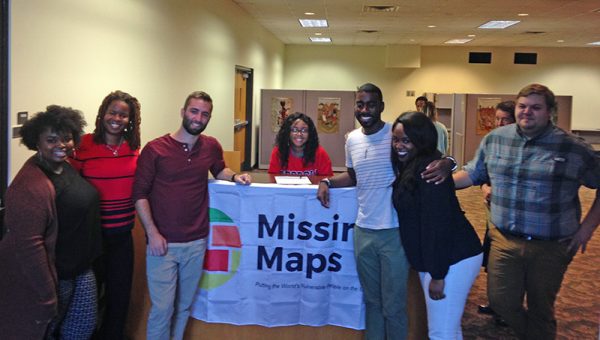 The Public Health Association at UGA, an organization for graduate students in the University of Georgia College of Public Health, partnered with the American Society for Photogrammetry and Remote Sensing Student Chapter at UGA to organize the event Nov. 15 at UGA’s Main Library and Nov. 16 on UGA’s Health Sciences Campus.

The aim of the event was to meet the mapping needs of the U.S. President’s Emergency Plan for AIDS Relief (PEPFAR). Kenya was assigned by the U.S. Department of State as the UGA team’s priority country for mapping. Map data entered by the Mapathon volunteers will assist international partners in HIV prevention initiatives.

Donating both their time and their laptops, participants traced roads and buildings using satellite imagery into OpenStreetMap, a free, editable map of the whole world built and maintained by volunteers and released with an open-content license.
Read more

Addressing Mental Health Needs through Telehealth
Two of the biggest issues affecting people living with HIV/AIDS are mental health and substance use, as these factors play an important role in medication adherence and healthcare utilization.

Dr. Carolyn Lauckner, assistant professor of health promotion and behavior, is currently completing two projects that tackle these issues. The first, Project TRAC (Tracking and Reducing Alcohol Consumption), concerns the use of smartphones and mobile breathalyzers for monitoring alcohol use and medication adherence among people living with HIV/AIDS. This pilot study just finished enrollment and had a sample of approximately 20 participants track their alcohol and medication use twice a day over a two-week period using smartphones. While evaluation is currently underway, preliminary results indicate that people living with HIV/AIDS find smartphones to be accessible and easy-to-use tools for monitoring their health behaviors. The second project, called Project MIGHT (Mental Health Interventions for Georgians with HIV/AIDS using Telehealth), is an effort co-led with Dr. Bernadette Heckman in UGA’s College of Education and members of the Georgia Department of Public Health. This project aims to use videoconferencing to provide specialty mental health care to people living with HIV/AIDS in underserved areas throughout the state. Doctoral students in the counseling psychology program at UGA will connect with patients in Ryan White HIV/AIDS Clinics and provide tailored therapy through the use of videoconferencing. While in its early stages, it is anticipated that this project will bolster the mental health infrastructure in the state of Georgia while providing training to students and much-needed mental health care to patients.

Dr. Timothy Heckman, associate dean for research and professor of health promotion and behavior, is working to reduce the mental health disparities that affect persons living with HIV/AIDS in rural areas. These individuals are 1.3 times more likely to be depressed and make fewer visits to mental health care professionals than their urban counterparts due to provider shortages, fewer social supports, and more HIV-related stigma. To address these issues, Dr. Heckman has led a multi-year study to test whether tele-interpersonal psychotherapy can overcome these barriers and help HIV-infected persons address their depression. A randomized clinical trial showed that tele-IPT effectively reduced symptoms of depression for study participants. A paper detailing the study’s acute findings was published in Behavioral Medicine. A paper describing long-term findings is forthcoming.

Understanding Population-wide Trends of HIV Transmission
Dr. Steve Bellan, assistant professor of epidemiology and biostatistics, uses computer simulation models of the spread of HIV within populations to understand what types of processes can generate the patterns observed in data from empirical studies. In this work, Dr. Bellan is particularly interested in how transmission patterns and the effectiveness of interventions are affected by variation across individuals in their susceptibility to infection, their infectiousness (once infected), and their treatment response. In recent studies, Dr. Bellan’s work has illustrated that more aggressive expansion of treatment programs in San Francisco would be in cost-effective even in the face of drug resistance. Other recent work has demonstrated that individuals recently infected with HIV are not nearly as infectious as has been thought for several decades.”

Dr. Christopher Whalen, Ernest Corn Professor of Infectious Disease Epidemiology, has assembled an impressive array of internationally-focused research projects in the areas of epidemiology and public health. His most recent grant, $1.49 million from the NIH Fogarty International Center in 2015, helps train Ugandan scientists to study the transmission of HIV and tuberculosis — a global health threat that kills 50,000 people annually in East Africa alone. Through this grant, UGA is partnering with Makerere University in Kampala, Uganda, to train Ugandan scientists in new and emerging methods increasingly important in understanding the complex transmission dynamics of HIV and Mycobacterium tuberculosis, the bacterium responsible for tuberculosis. Dr. Whalen’s current project is comparing cellphone network data with information about known TB cases to map person-to-person disease transmission.