University of Massachussets-Amherst School of Public Health and Health Sciences professor emeritus of kinesiology Dr. Joseph Hamill has been named a Fellow of the American Society of Biomechanics (ASB). ASB created the status of Fellow in 2011 to recognize scientific achievement and service to the Society and to encourage continued service in leadership roles. He was inducted during the organization’s 2017 annual meeting held in Boulder, Colorado, in August. 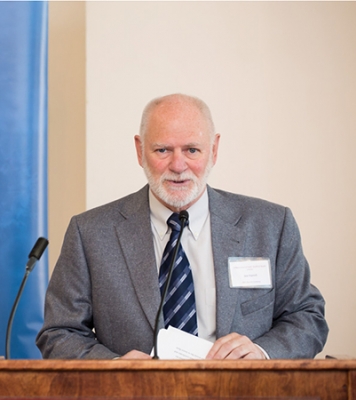 “I am honored to have been named a Fellow of the American Society of Biomechanics,” says Dr. Hamill. “To be recognized by one’s colleagues is the highest award one can receive.”

Biomechanics is the field of study that involves the application of mechanical principles in the study of biological systems. The ASB was founded in 1977 to encourage and foster the exchange of information and ideas among biomechanists working in different disciplines and fields of application, and to facilitate the development of biomechanics as a basic and applied science. It has a membership of almost 1000 academic researchers, clinicians, scientists, students, and industry members working to solve basic and applied problems in the realm of biomechanics and to improve understanding of the workings of biological systems.

Dr. Hamill studies the coordination and control of lower extremity segments during human locomotion. His research has addressed functional variability from a dynamical systems perspective in both healthy and pathological gait. His aim is to determine risk factors for overuse running injuries. He has been funded for his research by several federal agencies in addition to private industry.