In 2002, a group of newly recruited infectious diseases faculty members in the department of epidemiology at the University of North Carolina Gillings School of Global Public Health submitted a grant proposal to the National Institute of Child Health and Human Development’s Global Network for Women’s and Children’s Health Research.

The grant was awarded, and UNC’s collaboration with the Kinshasa School of Public Health began.

The partnership has produced numerous interesting and important studies, including one to assess whether adding ground-up caterpillars (as a source of protein) to infant food promotes infant development.

Malaria has been a major focus of the research, the collaborators having published 37 articles on malaria in scientific journals since 2005.

Dr. Steve Meshnick, professor and associate chair of the epidemiology department at the UNC Gillings School and professor of microbiology and immunology in the UNC School of Medicine, and colleagues published the first reports of antifolate- and chloroquine-resistant mutations in one malaria-causing parasite, P. falciparum, in the Democratic Republic of the Congo (DRC) and some of the first studies of pregnant women treated with the antimalarial medication, artesunate.

A longitudinal study of malaria in pregnant women in Kinshasa was one of the first to show that malaria early in pregnancy (before intermittent preventive treatment begins) can have deleterious effects on the fetus.

Previously, most information on tropical diseases was obtained from a handful of sites, usually chosen by chance or because they were accessible. Thus, the prevalence numbers were often quite biased.

However, the DRC recently had completed a large, nationwide, population-representative survey called the Demographic and Health Survey (DHS).  The research team obtained 9,000 dried blood spots, from the 2007 survey, which were analyzed to generate the first maps of tropical diseases (African sleeping sickness and malaria) in the DRC since 1951.

[Photo: LEFT:  Research teams collaborate closely with local health centers to support guideline-based health care and to design studies relevant to the community. RIGHT: Dr. Steve Meshnick (on left) poses by the Congo River in 2010 with DRC colleague Dr. Antoinette Tshefu (in center) and the head of the National Malaria Control program.]

The 2010 Gillings Innovation Lab was followed by several new National Institutes of Health grants leveraging 26,000 samples from the second DHS in 2013. The group has coalesced into the Infectious Disease Ecology and Epidemiology Lab (IDEEL); the DRC remains its most active research site.

The UNC-Kinshasa research team has made important contributions to the understanding of malaria in the DRC and, more widely, in Africa. The researchers showed how data from the DHS could be used to guide interventions, choices of antimalarials, and even choices of insecticide-treated bed nets.  (For instance, deltamethrin-treated nets were found to be significantly protective, while permethrin-treated nets provided no protection.) 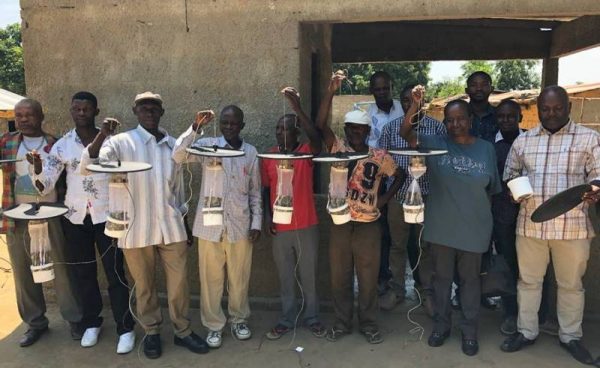 Most importantly, researchers discovered that the gene that coded for the histidine-rich protein (HRP) in the most common malaria, P. falciparum, was being deleted, and that this deletion was spreading.  The spread of the gene mutation is important because detection of the HRP is used to diagnose in commonly used rapid, point-of-care diagnostic tests. The malaria parasite essentially was developing “stealth technology” and becoming undetectable.  The team also discovered that a second malaria parasite, P. vivax, was actually quite common in the DRC, despite previously having been thought to be absent.

Dr. Meshnick and his collaborators, including Drs. Jon Juliano and Jon Parr, faculty members in infectious diseases at the UNC School of Medicine, have launched a combined epidemiological and entomological longitudinal cohort study of malaria transmission among 1,600 individuals in Kinshasa Province.  Enrollment began in 2014, and the study is currently funded through 2023. The team plans to evaluate new types of bednets and diagnostics. Of relevance to the DHS, the researchers found that the primary reservoir for malaria includes young people ages five to fifteen, exactly the group excluded by DHS surveys.

The malaria work served as a jumping-off point for prevalence studies of other infectious diseases, including Hepatitis B, Hepatitis C and flaviviruses, including Dengue, Zika and yellow fever.   Even though a vaccine for Hepatitis B exists, the group found a very high prevalence (3.2 percent) of Hepatitis B in children.  The group is now piloting an intervention to prevent vertical transmission of Hepatitis B, again  with support from the Gillings Innovation Labs.