Mr. Aaron S. Williams, adjunct professor of health policy and management at the University of North Carolina Gillings School of Global Public Health and longtime executive at RTI International, has been awarded “emeritus” status by RTI, in recognition of his long and distinguished career in public service. 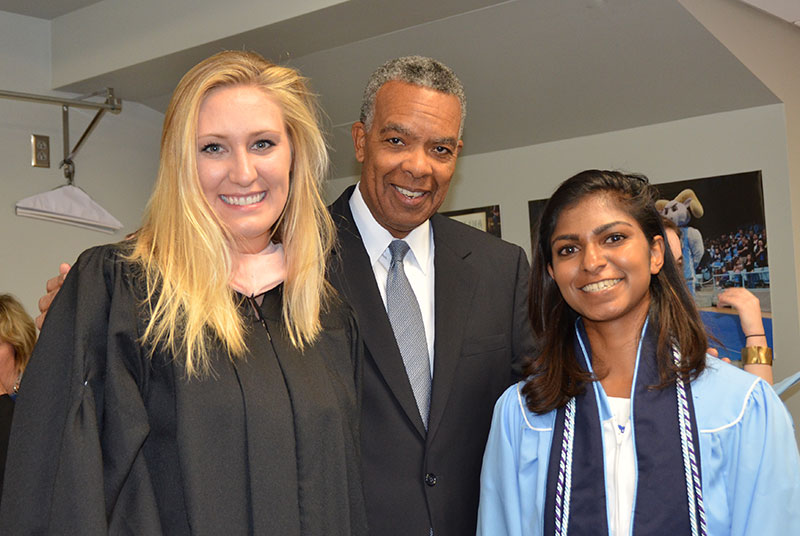 Emeritus status is the highest recognition that RTI bestows on its leaders and is a reflection of the recipient’s superior achievements.

“We are proud to bestow this honor on Aaron Williams, whose leadership contributions had significant and positive impacts on people around the world,” said Mr. E. Wayne Holden, RTI’s president and chief executive officer. “Aaron’s expertise with complex education, health and governance programs has led to innovative and enduring solutions.”

Attending the reception and honoring Mr. Williams were colleagues, associates and friends, including members of Congress and representatives from the U.S. Agency for International Development (USAID), the Center for Strategic and International Studies (CSIS), the U.S. Global Leadership Coalition (USGLC), the Peace Corps and the International Youth Foundation.

Mr. Williams’ long and distinguished career began when he was a Peace Corps volunteer in the Dominican Republic.  Later at USAID, he rose to be a career minister in the Senior Foreign Service and was awarded the Distinguished Career Service Award and the Presidential Award for Distinguished Service.

In 2009, President Barack Obama appointed Mr. Williams as director of the U.S Peace Corps. Mr. Williams was confirmed by the United States Senate in August 2009 and served as director until September 2012. Under his leadership, the Peace Corps’ reach was expanded into Sierra Leone, Indonesia, Columbia, Tunisia and Nepal.  He also led the White House delegations to the 2012 presidential inauguration in Guatemala and to the bicentennial celebration of the independence of Paraguay in 2011.

A member of the Council on Foreign Relations, Mr. Williams serves on the boards of directors of the Ron Brown Scholar Program, Seed Global Health and Child Fund International and the George Washington University – Elliott Scholl of International Affairs’ Advisory Board. He also has served on the boards of directors of the U.S. Global Leadership Campaign, CARE, the National Peace Corps Association, and the Institute for Sustainable Communities.

Other career highlights include serving on the Obama-Biden transition team and being appointed by President Barack Obama as the U.S. alternative representative to the executive board of the United Nations Children’s Fund (UNICEF).