UNC Physician Asks, “Global Health: What’s in It for Us?”

Why would an American oncologist, employed at one of the country’s preeminent public universities, choose to live and work abroad, placing himself and his family at risk of diseases they wouldn’t be exposed to in the United States? 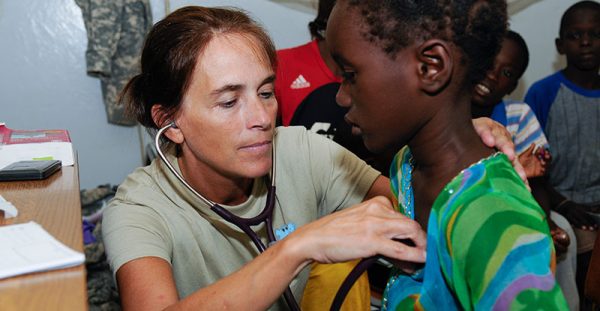 [Photo: Practicing medicine in different contexts has shown UNC’s Dr. Satish Gopal that medicine fundamentally is the same around the world, with disparities in resources being the primary differentiator. Photo courtesy of the Vermont National Guard.]

In a moving commentary in the October 10 edition of JAMA, Dr. Satish Gopal, adjunct assistant professor of epidemiology at the University of North Carolina Gillings School of Global Public Health, explores that question.

Dr. Gopal relates his dual role of physician and father in taking care of his 7-year-old daughter, as she suffered from cerebral malaria in Malawi, where the family lives. His daughter made a complete recovery, but he could not help comparing her care in Malawi to that which she would have received at UNC.

“At my home institution,” he wrote, “she would have been in a pediatric intensive care unit to monitor her neurological status, fluid balance and blood counts. Instead, I slept in a bed next to her and tried to convince myself that my eyes and hands would be a suitable substitute for the technology that would have encircled her in Chapel Hill.”

He describes being asked on occasion why he chose to provide cancer care and conduct research in Malawi, and how that work benefits people in the U.S., questions that have particular urgency now, given the uncertainty of further funding for global health research.

Practicing medicine in different contexts has shown him, he said, that medicine fundamentally is the same around the world, with disparities in resources being the primary differentiator. Sustained efforts to develop best practices and effective care may be as valuable as waiting for the rare medical “breakthrough,” and humanitarianism – helping patients who otherwise certainly would die – benefits a practitioner’s profession, program and country, no matter where he or she is.

Dr. Gopal, whose commentary is titled “Global Health: What’s in it for us?”, is also associate professor of medicine in the UNC School of Medicine and cancer program director of UNC Project Malawi.

“I hope my American daughter, raised in Africa, one day lives in a world without HIV or malaria or cancer,” he wrote. “When this happens, we will be glad that our family sacrificed a little, that our program contributed a lot and that the global health research community prioritized these goals over many years to accomplish them for everyone’s benefit, including [the benefit of those] people who ask me why my family and I choose to live in Malawi – and what’s in it for us.”