It may seem surprising that more than 80 percent of African-American smokers use menthol cigarettes – compared to just 29 percent of white smokers – until you learn more about how cigarette companies market their products. A new study led by researchers at the University of North Carolina at Chapel Hill has reported on the details of disparities in retail marketing for menthol cigarettes in the United States, finding that the leading menthol brand has a unique pattern of targeting their marketing to African-Americans.

The study, published online July 26 in the journal Health & Place, was led by Dr. Sarah Mills, postdoctoral fellow in the Cancer Control Education Program at UNC’s Lineberger Comprehensive Cancer Center. Cancer Control Education Program leader Dr. Kurt Ribisl, who also is professor and chair for the department of health behavior at the University of North Carolina Gillings School of Global Public Health, was a co-author.

To date, a growing body of literature has demonstrated that in-store marketing for menthol cigarettes targets youth, ethnic minority and low-income populations. However, most studies are conducted in single states or cities. In this study, researchers examined stores’ exterior advertising and price for menthol cigarettes, and compared the availability of price promotions for menthols across three leading cigarette brands, Newport, Marlboro and Camel, in a national sample of 2,124 tobacco retailers.

“Most studies focus on retail marketing for Newport because it is the most popular menthol cigarette brand,” Dr. Mills said. “Ours is the first study to compare the availability of in-store price promotions for cigarettes across three leading brands (Newport, Marlboro and Camel) to determine if their marketing practices differ. We found that price promotions for Newport were more common in neighborhoods with more African-American residents – a pattern we did not find for either Marlboro or Camel.”

In the U.S. overall, 39 percent of smokers use menthol cigarettes. Menthol is an organic compound that, when added to cigarettes, has a cooling effect and blocks pain receptors in the mouth and throat. In the past, menthol cigarettes were falsely portrayed as healthier than non-menthols, which has led to lingering misconceptions. Seven percent of menthol smokers still believe their brand is less harmful than others.

In reality, the analgesic and cooling effects of menthol help to mask the harshness of the cigarette smoke, allowing for deeper inhalation of harmful ingredients. In 2011, the Tobacco Products Scientific Advisory Committee, a Congressionally mandated group that advised the U.S. Food and Drug Administration’s Center for Tobacco Products, concluded that menthol increases smoking initiation and makes it more difficult to quit.

“Since 2013, at least 13 U.S. communities have banned the sale of menthol cigarettes, but they did so facing tobacco industry opposition,” said Dr. Mills. “For instance, Reynolds spent $12 million on a campaign against a menthol cigarette ban in San Francisco and lost. This study underscores the need for other cities to pass and implement menthol bans.”

“Marketing of menthol cigarettes to specific groups is a social justice issue,” Dr. Mills said. “Our research shows that youth, low-income and African-American residents are targeted with this particularly harmful and addictive product. In 2009, the FDA banned cigarettes with characterizing flavors but, despite pressure from public health researchers and community activists, excluded menthol flavoring from the ban. Our study highlights the need for a federal menthol cigarette ban and shows that it could reduce cigarette marketing in the neighborhoods that need it most.”

Smoking is responsible for nearly half a million preventable deaths in the United States each year. In the absence of a federal ban to outlaw menthols, Dr. Ribisl expressed his desire for interim measures.

“This study emphasizes the need for policies that will curtail harmful and unfair menthol cigarette marketing in our communities,” he said. 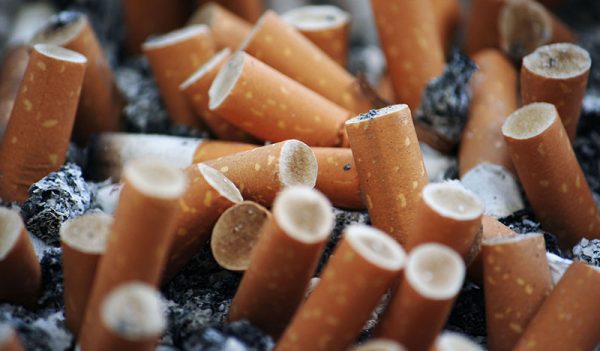 [Photo: UNC researcher Dr. Sarah Mills says the marketing of menthol cigarettes to specific groups is a social justice issue. “Our research shows that youth, low-income and African-American residents are targeted with this particularly harmful and addictive product,” she said. (Photo by Prime Number/Flickr Creative Commons)]