Why are some people able to stop after eating just a few potato chips, while others aren’t satisfied until the bag is nothing but crumbs? The answer may lie in the signals acting in the brain’s reward system. 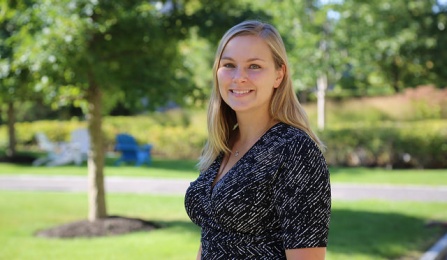 A University at Buffalo public health researcher is investigating these signals and their potential relationship to overeating, with a particular focus on sex differences through studies in a rodent model. The study outcomes could help provide a better understanding of — and treatment for — obesity. Dr. Elizabeth Mietlicki-Baase, an assistant professor of exercise and nutrition sciences in University at Buffalo School of Public Health, is zeroing in on amylin signaling in the brain. Amylin is a hormone produced in the pancreas and in the brain.

The brain contains numerous amylin receptors. During her postdoctoral research at the University of Pennsylvania, Dr. Mietlicki-Baase focused on the brain’s mesolimbic reward system and, in particular, a structure known as the ventral tegmental area, or VTA, which affects food intake, body weight and food reward. Her research identified the VTA as a novel site of action in the brain at which amylin controls energy balance.

At UB, she received a grant from the National Institutes of Health (NIH)/National Institute of Diabetes and Digestive and Kidney Diseases (NIDDK) for $159,500 from July 17, 2017 – June 30, 2019 to further investigate how amylin impacts food intake, with an emphasis on discovering how amylin signaling in the brain differs between male and female rats. “I’m one of probably a handful of researchers studying amylin’s effects on food reward, especially the sex differences aspect of it,” Dr. Mietlicki-Baase says.

For the study, rodents will be given two different diets. One is a bland but nutritionally complete diet, while the other is a sweeter, fattier and tastier food. “When rats are on this high-fat diet, we see more potent effects of amylin signaling in the VTA to reduce food intake. That could be really important because in humans, if we’re able to identify a therapy that has more potent effects on junk food intake as opposed to healthier foods, it could be very valuable,” Dr. Mietlicki-Baase says.  She is collaborating with Dr. Stewart Clark, assistant professor of pharmacology and toxicology in the Jacobs School of Medicine and Biomedical Sciences at UB on this project.

Dr. Mietlicki-Baase is also interested in understanding the neural underpinnings of drug addiction. She also recently received a NARSAD Young Investigator grant from the Brain & Behavior Research Foundation for $70,000 from January 15, 2018 – January 14, 2020 to continue her previous research in this area. Here, she is focusing on a hormone known as glucagon-like peptide-1 (GLP-1) which, similar to amylin, affects food intake and body weight. GLP-1 has also been shown to reduce cocaine taking in rats. “That’s really interesting because there’s growing literature suggesting that dysregulated energy intake and overconsumption of palatable foods has several physiological parallels with drug addiction,” she said.

The Brain & Behavior Research Foundation grant will examine how GLP-1 signaling in the brain affects drug seeking. “We’re trying to understand if we manipulate GLP-1 receptor signaling in the hindbrain, can that impact a rat’s motivation to seek out cocaine after the rat has gone through a period of drug abstinence?” Dr. Mietlicki-Baase said.

The results of these experiments could help lead to pharmacological options for treating addiction in humans. “The study will help improve our understanding of how addiction occurs in humans by identifying new sites of action in the brain that are relevant for these behaviors, and by identifying systems that we can potentially target with pharmacotherapies,” Dr. Mietlicki-Baase says. Dr. Mietlicki-Baase is collaborating on this project with David Dietz, associate professor and interim chair of pharmacology and toxicology in the Jacobs School of Medicine and Biomedical Sciences at UB.