A guide to help battle a potentially fatal disease transferred by a blood-sucking insect called the kissing bug has been published by a task force led by The University of Texas Health Science Center at Houston (UTHealth) School of Public Health.

While it may not make good bedtime reading, the new image-based guide from the Texas Chagas Task Force could keep you from falling victim to a disease caused by a parasite that the kissing bug carries. The parasite is Trypanosoma cruzi (T.cruzi), and the disease it causes is called Chagas disease. It is dubbed the silent killer because its symptoms are so elusive. If caught early, Chagas disease is treatable but if left undetected and untreated, it can eventually lead to problems such as heart failure, an enlarged heart or stroke.

“There’s still a widespread lack of knowledge about the insects that carry the parasite and this neglected disease, which often at first shows no signs whatsoever. Most people aren’t even aware of Chagas, let alone that it exists here in the United States,” said Dr. Paula Stigler-Granados, head of the task force and assistant professor at UTHealth School of Public Health in San Antonio. “We aim to change that by telling people all about it because early diagnosis and treatment are absolutely vital to avoid its potentially debilitating, even deadly, effects.”

Dr. Stigler-Granados wants everyone to be able to recognize the kissing bug and know that if they may have been bitten, or have been exposed to one, they need to tell their doctor and get tested.

“Everyone, especially in Texas, should know what these insects look like, how to avoid them and what to do if they happen to find one in or around their homes. It’s a complete myth that they are only found in mud huts. We see them everywhere, including million-dollar homes,” Dr. Stigler-Granados said. “This is an important guide, not only for the general public but also for physicians and veterinarians who are often on the frontline of talking with the public about the disease.”

The hot summer months are peak season for kissing bug activity in Texas, she said. Chagas disease is estimated to affect more than 7 million people worldwide. Although most prevalent in Latin America, kissing bugs and Chagas disease can also be found in the Southern United States.

Recent research has shown a high rate of kissing bugs infected with the T.cruzi parasite in Texas, amounting to 64 percent of captured insects in one study and 60 percent in a military study in the San Antonio area.

Kissing bugs often bite victims around the mouth or eyes while they sleep, thus leading to its name. But in reality, kissing bugs can bite anywhere on the body.

The disease is mainly transmitted through the feces of the insect, which gets into the bite wound. It can also be passed from mother to fetus and through contaminated blood products or even contaminated food or beverages.

Once people are infected, there may be no indication of contracting the disease for years or even decades. For those who do develop symptoms, the disease can begin to affect the heart or digestive systems, at which point it can become potentially fatal.

“This mysterious disease itself does not present with a lot of symptoms initially, if any at all. You may have a spot or a welt from the bite, or you experience mild flu-like symptoms,” Dr. Stigler-Granados said. “Ultimately Chagas can progress to the chronic symptomatic phase, which typically manifests itself as heart disease, although gastrointestinal disease is also possible.

Physicians can prescribe a medication to treat Chagas disease in adults and children. The CDC can also assist with coordinating treatment using other drug options.

Facts about the disease, maps and pictures of the multiple species of kissing bugs found in the Southern United States are featured in the comprehensive guide. Life-size young and adult insects are shown, pointing out their distinguishing characteristics. It also identifies look-alike insects, which don’t transmit the parasite, to help people rule out possible suspects.

“If in doubt, you should take the necessary precautions and submit the insect for testing, which will not only assist with prevention but also surveillance of the disease,” Dr. Stigler-Granados said.

Common kissing bug habitats, such as beneath porches, dog houses and kennels, chicken coops, and rodent nests, are discussed.

Kissing bugs should never be handled with bare hands or crushed, due to the parasite’s presence in its gut. Clear guidance is provided on how to safely collect a suspected kissing bug and how to send it to be tested if suspected of biting someone and/or if found inside the home or if found outside the home.

The guide was funded by a five-year $544,329 cooperative agreement grant from the CDC to conduct outreach and education on Chagas in Texas. More than 20 experts who are part of the task force, along with close collaboration with Texas A&M School of Veterinary Medicine and Biomedical Sciences, were involved in its production.

Top tips on how to keep kissing bugs at bay 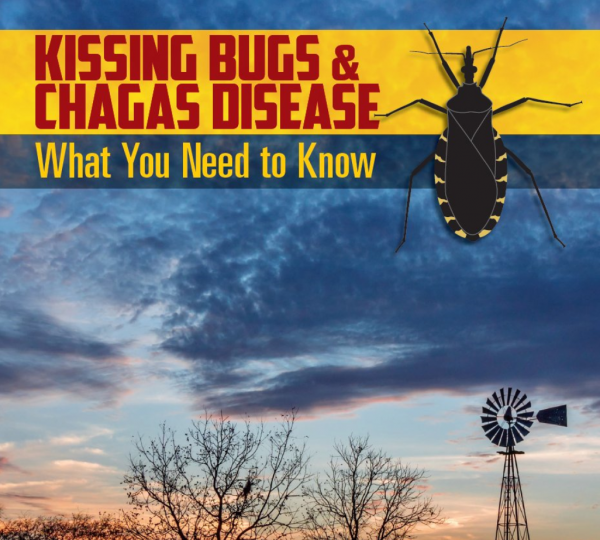