Catatonia, a syndrome of motor, emotional and behavioral abnormalities frequently characterized by muscular rigidity and a trance-like mental stupor and at times manifesting with great excitement or agitation, can occur during a critical illness and appear similar to delirium. But the management strategies are vastly different.

A Vanderbilt University Medical Center (VUMC) study is the largest to look at the novel relationship between catatonia and delirium in critical illness and determine if catatonia can be reliably diagnosed in the setting of delirium.

This is important because managing each is different, said Dr. Jo Ellen Wilson, instructor in psychiatry and behavioral sciences and lead author of the study, “The Delirium and Catatonia (DeCat) Prospective Cohort Investigation,” recently published in Critical Care Medicine. 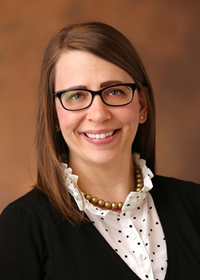 Benzodiazepines are the first-line treatment for catatonia, but antipsychotic drugs are generally avoided because they can worsen the condition, and if left untreated could result in death. However, antipsychotics are often used to manage delirium, so differentiating the two is critical, she said.

Because of the similarities, one can be misdiagnosed as the other, Dr. Wilson said. In the classical presentation of catatonia, people stare or are trance-like. There’s also a hyperactive form where patients have abnormally frequent or bizarre movements and mannerisms and can become agitated. It can be brief or can go on for days or longer. There are also more severe forms that can lead to significant vital sign abnormalities and the need for life support measures.

“It can be tricky to distinguish one from the other. But there’s a lot on the line with getting the accurate diagnosis,” Dr. Wilson said.

“Our understanding of catatonia in the ICU is being hampered by a diagnostic dilemma,” Dr. Wilson said. “The last three editions of the Diagnostic Statistical Manual (DSM), including the current edition, DSM-5, say that a diagnosis of catatonia due to another medical condition can’t be made exclusively in the presence of delirium.”

Dr. Wilson’s blinded study looked at 136 critically ill patients at VUMC and independently evaluated them for the presence of delirium and catatonia.

Additionally, Dr. Wilson’s study showed that by using a revised cut-off of greater than or equal to four (items present), on the Bush Francis instrument, you could reliably diagnose catatonia with 91 percent sensitivity and specificity in the setting of delirium.

Dr. Wilson said the DSM is considered to be a “living document,” and therefore new and compelling evidence should spur thoughtful considerations of changes in the diagnostic criteria of catatonia. Since her results found that approximately one out of three patients had co-occurring delirium and catatonia, and showed that catatonia can be reliably diagnosed in the setting of delirium using revised cut-off points on the most widely used rating scale, this suggests a reconsideration of the DSM-5 criteria for “Catatonia Due to Another Medical Condition.”

Furthermore, for the bedside clinician, the study represents a change in thinking since delirium is a commonly considered form of brain dysfunction in critically ill patients and catatonia is rarely considered.

An accompanying editorial said the study represents a “paradigm shift in the making.”

“Going forward, the ICU practitioner should consider co-occurrence of catatonia in patients with persistent delirium, especially if several catatonia signs are present or if their clinical status worsens on antipsychotics,” Dr. Wilson said.

With the support of the Vanderbilt Clinical and Translational Research Scholars Program, Dr. Wilson, E. Wesley Ely, and their team are now studying the risk factors for the development of catatonia in critical illness and the clinical relevance of these forms of acute brain dysfunction for the patient.

The work was supported by the VA Quality Scholars Program (Office of Academic Affiliations, Department of Veterans Affairs).

Previously Dr. Wilson authored a case report after she helped diagnose catatonia in a young patient on life support at Vanderbilt.

Her 2015 study in Schizophrenia Research looked at the difficulty in defining and diagnosing catatonia.