When they occur among people living with HIV, certain cancers and opportunistic infections are considered by health authorities as AIDS-defining events, or ADEs. 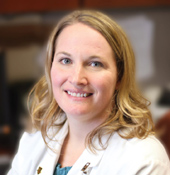 The Centers for Disease Control and Prevention recognizes 27 ADEs, from pneumonia to tuberculosis to cervical cancer to wasting syndrome. When a death is attributed to AIDS, usually one or more recognized ADEs is involved.

The availability of effective antiretroviral drug therapy has rendered HIV/AIDS a chronic disease in much of the world, no longer acutely fatal when treated. Among people living with HIV, at least in some developed regions, a so-called non-AIDS death appears at least as likely as a death attributed directly to AIDS.

In a study published recently in the Journal of the International AIDS Society, Dr. April Pettit, assistant professor of medicine, and colleagues focus on non-AIDS mortality among people on antiretroviral treatment in relatively high-income countries. They specifically examine mortality among patients who’ve survived an ADE since starting their HIV/AIDS drug therapy.

The team examined records of 124,587 antiretroviral patients, with a median follow-up period of 5.2 years. Data were provided by the international Antiretrovial Therapy Cohort Collaboration (ART-CC).

After adjusting their analysis for medical and demographic covariates (including time-updated covariates), the authors found that having survived an ADE is associated with 121 percent greater risk of non-AIDS death.

“These findings suggest that a common pathway may be independently driving both ADEs and NADE (non-AIDS) mortality. These findings underscore the need for future studies to elucidate a potential mechanism for this association, including that of chronic inflammation and immune activation due to ADEs,” the authors wrote.

Of these three ADEs, only tuberculosis (TB) was associated with a higher cardiovascular death rate. PJP was associated with higher rates of respiratory death and accident/suicide/overdose, with the latter association suggesting the influence of unmeasured confounders, according to the authors, such as mental illness and alcohol or drug abuse. Smoking and body mass index, neither of which are measured by the ART-CC, are two other known confounders not included in the analysis.