Ms. Kelsey Grinde, a doctoral student in the department of biostatistics at the University of Washington School of Public Health, is a recipient of the inaugural Dorothy L. Simpson Leadership Award, presented by the Seattle Chapter of Achievement Rewards for College Scientists (ARCS) Foundation. The award recognizes exceptional qualities of leadership, intellectual curiosity, generosity of community commitment and dedication to the greater good. 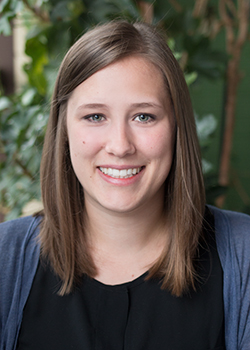 “In addition to being one of our outstanding ARCS scholars, we were especially impressed by Kelsey’s demonstrated leadership in outreach, teaching, and mentoring to women and under-represented minorities,” said Chapter President Ms. Amy Rudolf.

Ms. Grinde’s research interests fall broadly between statistical genetics and multiple testing, with the end goal of using large genetic datasets to answer questions about human disease and population history. Her work to date has focused on statistical inference in populations with diverse ancestry and on identifying rare genetic variants associated with complex traits and/or diseases. For her dissertation, she is focusing on admixture mapping.

“It is a huge honor to be the first recipient of this award,” Ms. Grinde said. “Mentoring, outreach and teaching are all very important to me, but I think the focus for us as grad students is usually on academics and research; so, it really means a lot to be recognized for these efforts.”

Ms. Grinde has found support and inspiration through her involvement with the ARCS community. “Seeing people who have achieved so much success in their own professional lives and who continue to prioritize donating their time and money to support grad students in Washington is a great reminder that people in our community care about the work we’re doing and that it’s important for us as students to get involved in our communities as well,” she said.

Earlier this year, Ms. Grinde received the Gertrude Cox Scholarship from the American Statistical Association and was honored with an Excellence in Teaching Award by the UW’s department of biostatistics. She’s a past recipient of a National Science Foundation Graduate Research Fellowship and earned the department’s Donovan J. Thompson Award in 2016, an honor that recognizes the best combined performance on the PhD applied and theory qualifying exams.

Originally from Plymouth, Minnesota, Ms. Grinde graduated from St. Olaf College in 2014, where she studied math, statistics and Spanish and worked as a Center for Interdisciplinary Research Fellow.