As West Virginia University works toward becoming the world’s first Blue Zones Certified university, a graduate-student researcher in the West Virginia University School of Public Health is exploring how one of the Blue Zone Project’s tenets — eating an abundance of vegetables — can make individuals with diabetes, and those at-risk of developing the condition, healthier.

Ms. Rachel Wattick, a doctoral student specializing in social and behavioral sciences, investigated the association between a range of vegetarian diets and diabetes outcomes. She and her mentor Dr. Melissa Olfert — an associate professor of human nutrition and foods in the WVU Davis College of Agriculture, Natural Resources and Design — found that whole plant foods play a crucial role in preventing and managing type 2 diabetes. Their work is part of WVU’s Lifestyle Intervention Research Lab, which Dr. Olfert leads. 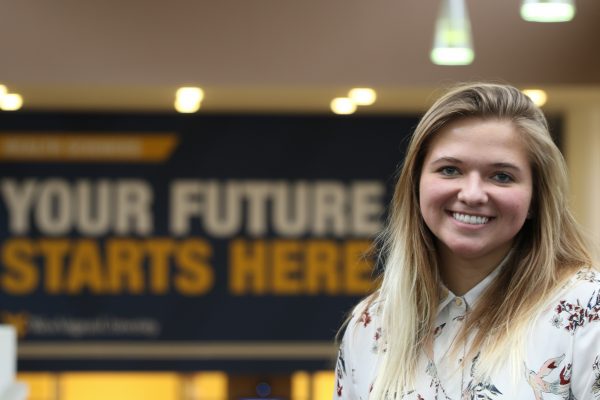 The Blue Zones Project — an initiative designed to help community members live longer, healthier lives and alleviate their chronic diseases such as type 2 diabetes — echoes Ms. Wattick’s and Dr. Olfert’s findings. The project encourages people to make most, if not all, of their food plant-based. Adopting a vegetarian diet is one way to clear that high bar.

The researchers performed a literature review of studies that focused on both diabetes and plant-based diets. Most of the studies were published in peer-reviewed journals within the past five years, but somewhat older studies were also included “if they were extremely relevant or if they touched on things that more current studies didn’t,” explained Ms. Wattick.

Across the spectrum of vegetarian diets that the studies probed — from veganism, which excludes eggs, cheese and other animal products, to semi-vegetarianism, which allows occasional meat eating — a correlation held constant: the more a diet relied on fruits, vegetables, whole grains, nuts, legumes and other plant-based foods low in saturated fat, the more it lowered someone’s risk of developing diabetes.

Among people who already had diabetes, plant-based diets were associated with healthier blood-sugar levels, lower body weight and reduced dependence on insulin and other diabetes medications.

In one study the researchers considered, 39 percent of participants who treated their diabetes with medication or insulin could stop taking the pills or giving themselves injections after they adopted a near-vegetarian diet.

Given the rising cost of insulin, using plant-based foods to shrink insulin doses or eliminate them entirely may be especially beneficial in West Virginia. The state has the highest incidence of diabetes in the nation but one of the lowest average household incomes.

In a recent study that Olfert led — titled “FRUVEDomics” and pending publication — a team of researchers asked 43 young adults to comply with the U.S. Department of Agriculture’s MyPlate guidelines. Participants were instructed to fill at least half of their plates with fruits and vegetables. All of the participants either had or were at risk of developing metabolic syndrome. Those who stuck to the diet recommendations spent, on average, $29 a week more on groceries than those who did not.

“Is it cheaper? No,” said Dr. Olfert. “But you have to weigh the pros and cons of a healthier plate for $29 more a week, versus getting fast food or grab-and-go, high-sodium and empty-calorie, convenient meals in the grocery store. Those are going to be what we consider calorie-dense but nutrient-poor foods, and that is the very crux of what promotes metabolic syndrome.”

“I think it would be interesting to do an analysis of how much people are actually paying for their insulin and comparing it to what they would pay for healthy food,” Ms. Wattick said.

Even if someone can’t afford to replace meat with healthy, plant-based foods in every meal, he or she is still better off making some substitutions than none at all.

“The research seems to show that veganism is the most therapeutic and protective diet for controlling and maintaining health with diabetes, but if we consider people’s current habits, and if they do eat meat regularly now, even beginning a semi-vegetarian diet—having meat just once a week — can help,” Ms. Wattick said.

In one study that the researchers took into account, the prevalence of diabetes decreased incrementally as people consumed fewer and fewer animal products. Participants who ate a typical amount of meat had a diabetes rate of 7.6 percent. Those the study classified as “semi-vegetarian” had a rate of 6.1 percent. Pescatarians (who eat fish but not meat), ovo-lacto vegetarians (who eschew meat but eat animal products) and vegans had rates of 4.8 percent, 3.2 percent and 2.9 percent, respectively.

“If you can make changes that you can adhere to, that’s important,” Ms. Wattick said. “And you could have your own diet that you follow that is very strict, but then, if you’re visiting family or you go out to eat, it’s okay sometimes to accommodate those situations. It’s not going to totally throw everything off.”

Title: “Vegetarian diets and the risk of diabetes”