For the second consecutive year, volunteers from West Virginia University assembled naloxone rescue kits that are currently being distributed to West Virginia counties that experience high risk of opioid overdose death. Funds for the naloxone and the kit materials are from the federal Substance Abuse and Mental Health Administration (SAMHSA) and are administered through a grant awarded to the WV Department of Health and Human Services, Bureau for Behavioral Health. The West Virginia University School of Public Health, through the Injury Control Research Center (ICRC), has partnered with the state to co-lead project efforts and evaluate the results.

A total of 1,740 kits were assembled at two sessions — one on August 29 at the WVU Health and Education building and one on September 12th at the ICRC. Volunteers from the WVU Health Research Center, the WVU Mountaineer Pharmacy, and the WVU Medicine Population Health Program gathered at the Health and Education building in August to assemble about half of the kits. Volunteers from the Delta Omega Honorary Society for graduate students in public health at WVU assembled the remaining kits during the September 12th session. This was the second consecutive year that Delta Omega participated in the project.

In the initial year of the grant, kits were distributed to Berkeley, Cabell, Kanawha and Mercer counties. In year two of the grant, three high-risk WV counties have received kits to date — Boone, Raleigh and Wood — and three additional counties will be receiving kits in the near future — Fayette, Logan and Wyoming.

“WVU students and staff who volunteer to assemble these kits are performing a valuable public service that contributes to preventing opioid overdose deaths across the State of West Virginia,” said Mr. Herb Linn, a program director with the WVU Health Research Center and co-lead for the SAMHSA grant. 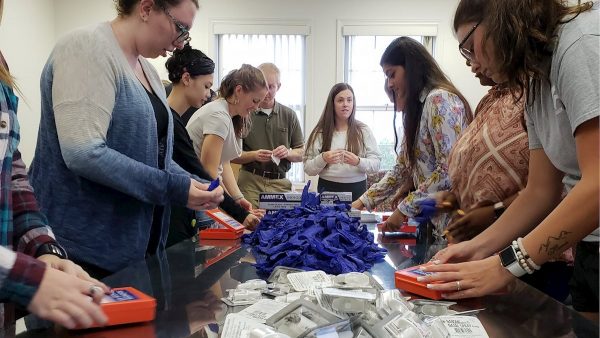